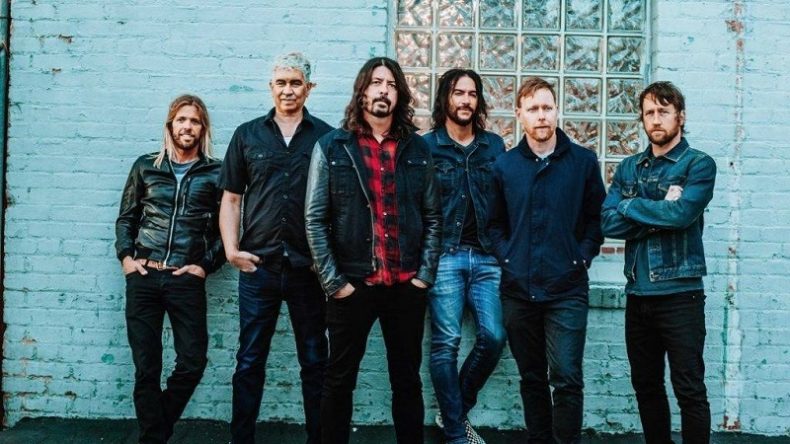 
“I know why you’re here. You’re here cause you want some rock ‘n’ roll” a drenched Dave Grohl shouts during “The Pretender” – the third song into a monumental set from the Foo Fighters. Well Dave, you’re fucken right we did. In what very well could be the biggest concert Toronto will see this summer – and quite possibly this year – with over 60,000 people in attendance, The Foo Fighters, along with English-Canadian classic rock revivalists The Struts and local Toronto bases The Beaches, sold out The Rogers Center for a truly incredible performance.

Local Toronto industry favourites The Beaches took the stage to open the show. The indie pop-rock outfit proved to be exactly what the early crowd wanted as they played through a brief set full of catchy choruses, poppy beats, and an overall sense of glamour. Their set included standout performances of their recent single, “Money” as well as “Boy Wonder”. While the band continues to accelerate further forward, this performance will certainly remain a career milestone for The Beaches for quite some time.

The Struts followed shortly after with an energetic and engaging set that gave modern hard rock a vintage glam edge. With the arena quickly filling up, the band blasted through a set that included material from their 2016 debut Everybody Wants, along with newer material from their upcoming release and their most recent single, “Body Talks”, released earlier this year. Sporting as much energy as they did sequins, The Struts proved that they are certainly a band to watch out for as they continue to move forward paving the way through the ongoing rock revival that is shaking North America.

After much anticipation, The Foo Fighters ran onto the stage to thunderous applause and cheers from the sold out audience as they dove straight into “All My Life”. The immediate reaction from the audience was nothing short of rapturous – and I must admit with this being my first Foo’s concert, there was something surreal about seeing Grohl run down the catwalk and back to center stage for what would be an amazing concert experience. The band then went into “Learn To Fly” followed by a greatly extended rendition of “The Pretender” where the band vamped on the middle instrumental break. This was the first of many well-orchestrated jams throughout the set that allowed for the band to solo, experiment, and add dynamics to their classic works. Most notably, the band added a Latin infused outro to “Rope” in which Grohl traded seemingly improvised licks with drummer Taylor Hawkins.

Throughout the set, the Foos performed a number of covers as well. When introducing members of the band, Grohl and company would often head straight into a different song, whether it be Alice Cooper’s “Under My Wheels” – with lead guitarist Chris Shiflett taking lead vocals – or the Pat Smear driven cover of The Ramones’ “Blitzkrieg Bop. Grohl also sang Van Halen’s “Jump” overtop the classic piano – performed by Rami Jaffee, the newest member of the band – line of John Lennon’s “Imagine”. The band also quickly teased Queen’s “Another One Bites The Dust” and would later in the set perform the Queen and David Bowie classic, “Under Pressure” with Grohl switching places with Hawkins who performed the duet with Luke Spiller of The Struts.

Of their original material, the Foo Fighters moved at a blistering pace only slowing down a handful of times with performances of “Walk”, “These Days”, “Big Me” and a solo introduction sung by Grohl leading into “My Hero”. Of their exceptional 2017 release, Concrete And Gold, the band performed the unrelenting “Run” along with “Sunday Rain” – sung by Hawkins following an exceptional drum solo on a lifted riser – “The Sky Is A Neighborhood” and “Dirty Water” – the latter two were performed alongside a quartet of backing vocals, one of whom was Violet Grohl, Dave’s twelve year old daughter. The remainder of the set consisted of hits such as “Monkey Wrench”, “This Is A Call”, “Breakout”, and the quintessential show closer, “Everlong”.

With a near three hour long career spanning set that included material from each of the band’s nine full length albums, the Foo Fighters – needless to say – put on a jaw dropping performance that will long be remembered. While they have been considered among rock’s greatest modern outfits, the Foo Fighters are moving seamlessly forward beyond simply writing and recording great albums to performing like the biggest and best band around by pulling out all the stops. Their Toronto show was no exception. All hail the Foo Fighters, rock ‘n’ roll, and the mighty Grohl!

A passion for music has always been a part of Gerrod’s life. As a young boy, he was raised on a steady diet of the music from The Chili Peppers, Aerosmith, The Stones, Prince, and others from his mum. Raised in the GTA, Gerrod continued to foster his love for music by attending a wide range of concerts and learning the drums. His unapologetic passion for music has no bounds and has spread to a wide variety of styles, whether it be the 90’s rock that sound tracked his teenage years, the jazz he studied in university, or his newfound love for hip-hop. He recently received his bachelors in music and education from York University and is passionate about writing and reviewing good (and less than good) music. Gerrod is also the drummer and songwriter for a Toronto based rock & roll band, One In The Chamber.
RELATED ARTICLES
foo fighterslive reviewthe beaches
8.0