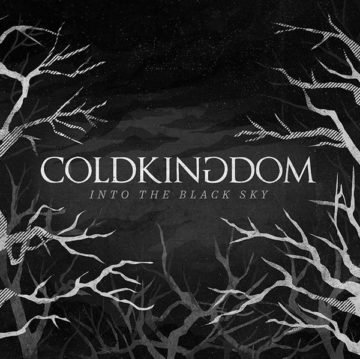 It’s been a hell of a year for the hard rock band Cold Kingdom. First they parted ways with their vocalist, then Elissa Pearson took over vocal duty. Then they welcomed keyboardist and backup vocalist Collin Pearson into the mix. With two new band members, they then proceeded to record and release a full-album, Into the Black Sky.

It’s evident that they have adapted to these changes well, because it sounds as if they’ve been playing together for years. Vocally, Elissa is a great fit and wears the crown of Cold Kingdom with ease. Collin’s contributions create added depth and texture to the songs.

“Desire” is a furious song that starts the album off   just right. “Left Me Haunted” and “After the Fall” are slower, but Elissa’s clean vocals make you feel the emotion in the lyrics that much more.

“A New Disaster” is a great song that represents the band’s overall sound well, so it makes an appropriate choice for their first release off the album. Honestly, this song has been stuck in my head. I have contributed an endless amount of views on YouTube for the video of this song. You’re welcome, Cold Kingdom!

Cold Kingdom tapped into their creative sources to come together and create a kick-ass album. Clearly, they have no problem meeting challenges head on.

Trista’s a music addict who’s taste in music spans over numerous genres. She enjoys playing her bass guitar, but honestly she’s not very good at it. So she goes to concerts and watches real musicians who are far more talented than her. You’ll find her there in the front row, because, well, she’s short and wouldn’t be able to see the stage very well otherwise, and because she strives to get the perfect photo to capture the experience.
RELATED ARTICLES
a new disasteralbum reviewalbum reviews