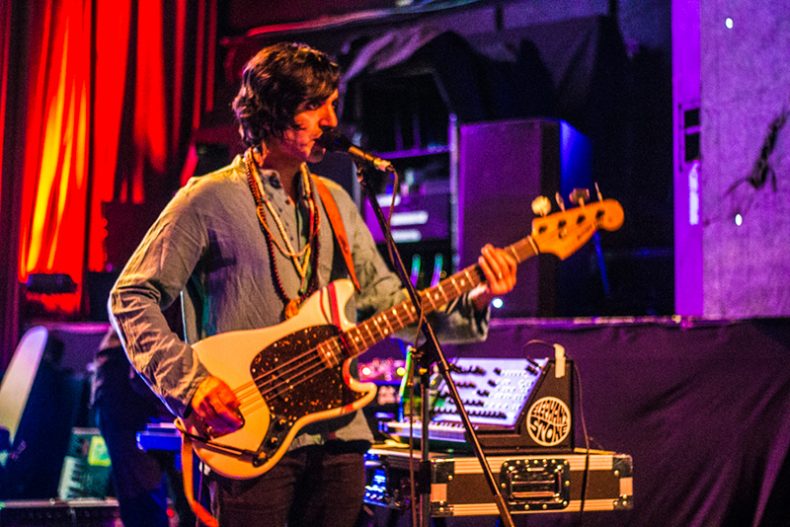 A dedicated crowd of Vancouverites filled the Fox Cabaret; the strange, quiet atmosphere of the concert goers could be explained by both rain and a stormy concurrent American election. With the results just in, it was time for many for a rock and roll escape.. Though circumstances demanded concern south of the boarder, the evening would be a strong showcase of all-Canadian music..

Starting off the evening were Thee Magic Circle, a local Vancouver five-piece psych outfit with a jubilant and spaced-out attitude. Lush, swirling and buttressed by effective songwriting hooks Thee Magic Circle succeed at both song craft and with extended instrumentals, turning up the temperature on guitar solos that lit up but never burnt out.  Beginning their set with a sitar, the group played with passion and enthusiasm. The musical standards of Canadian west-coast psych has been tightening up for a couple of years now due to the more than fortunate introduction of Levitation Vancouver; Thee Magic Circle, with their energetic five man attack, suggest that much can be expected out of the city’s blossoming psychedelic scene.

Playing second, the The Velveteins performed a set of competent yet comparatively less colourful song.  Though there was a dreamy element to the songs of the Edmonton based-three piece, they are inevitable more of a garage, crooner variety more in the taste of the Growlers.

Despite their relative obscurity, Elephant Stone find reverence in the eyes of the greater psychedelic community. Rishi Dhir is known for his sublime arrangements and concise, sweet songwriting. Touring in support of a new record entitled Ship of Fools, Elephant Stone laid out their their new Primal Scream inspired material and played a healthy dose of fan favourites. The lead track “Manipulator” feature a tasteful electronic update that felt all the more raw and tangible in a live-performance setting. Elephant Stone has been reluctant to hang too tightly to any particular styles; Bandleader Rishi Dhir has overseen many stylistic changes including mod and indie rock traditions; “Andromeda” treaded a dreamy contemporary path with subtle, alluring and catchy guitar melodies.  On new song “Silence Can Only Say So Much,” Dhir paired his sitar with some modulated vocals, visiting an area of sonic territory rarely, if ever, explored. The focused intricacies of the new material shows continued musical growth from the group.

Returning for an encore, guitarist Jean-Gabriel Lambert took the lead vocals with heavy digital effects. On each of their respective albums, Elephant Stone has explored particularly distinct territory; Ship of Fools is perhaps their most striking stylistic change thus far but remains rooted with tasteful analogue arrangements. Some of the newer material recalls Neil Young’s infamous 1980’s release Trans in its celebration of raw, early synth modulated vocals.

Elephant Stone is a band in which each release is a profound and thoughtful step forward. From  their dreamy sitar, to buoyant pop songs or glittering musicianship, it may take some time for their work to be duly appreciated. Maybe Thee Magic Circle’s use of sitar is a sign that spacey roots are taking hold.

The Spill Magazine is a Toronto-based online publication dedicated to covering the independent music scene with a strong focus on our thriving hometown talent. Our writers bring you up-to-date news, in-depth features on musicians and reviews for the latest CD releases. We also travel to the front lines for all local festivals including Canadian Music Week and North by Northeast. Don’t forget to check out our Facebook and Twitter pages for all daily Spill updates.
RELATED ARTICLES
elephant stonelive reviewrishi dhir
9.0