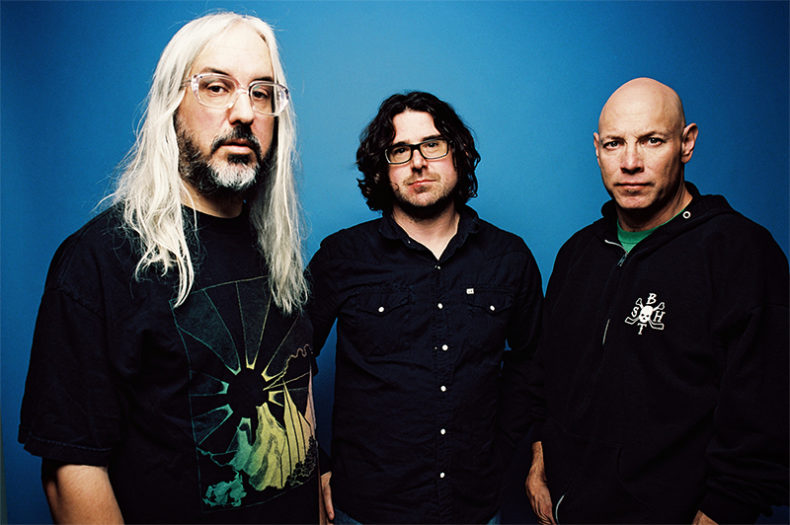 Despite being around since 1984, Dinosaur Jr still knows how to put on an amazing show. Tonight they took the stage at The Opera House in Toronto and put on a really solid show.

The stage was set up with the backdrop of their 2012 studio album cover, I Bet On Sky, which led some of the fans in the crowd to believe they might be playing many songs off that album. The stage setup was fairly close to the front of the stage, including the drum set which is rare for drummers to do. Guitarist and vocalist, J Mascis, had his amp set up in a half circle almost surrounding behind him with nine amps, having them all looking like they were still from the ‘80s which gave a really cool vibe to the show.

Dinosaur Jr. hit the stage without saying a word, kicking it off with the song, “The Lung”, off their second studio album, You’re Living All Over Me, which was one of the best songs they could have possibly opened with. It caught fans off guard, but it didn’t take long for them to start rocking out.

They followed with “Goin Down”, off their most recent album, Give a Glimpse of What Yer Not, which was an amazing performance, starting off the song with a prolonged intro that J Mascis put the opening guitar riff on loop and let the drummer, Murph, lead off with some pretty intense drum beats to start the song, and all of the sudden they all clashed in at the sometime and began the song.

Once they played one of their most commercialized songs, “Feel the Pain”, the atmosphere of the crowd changed. That’s when a little mosh pit broke out and everyone’s energy went up about five levels. Everyone seemed to be a lot more excited and way more into the rest of the set. Following that song, they played “Little Fury Things”, which has a really intense wah-wah pedal which filled The Opera House with the most immaculate sound which really kept the energy that was given off from “Feel The Pain”.

The rest of the set was so strongly put out they rarely stopped between songs to say anything, and would keep the vibe going as J Mascis would continue either making sounds or put the opening riff to songs on a loop pedal and would proceed to tune his guitar and would let Murph do some really interesting drums behind the riff, until they were all ready to go into the next tune.

For their encore, they came out and played a cover of The Cure song, “Just Like Heaven”, and “I Wanna Be Your Dog”, by The Stooges. What a perfect way to end the set to a really banging show. From the moment they stepped on the stage to the moment they got off, it was as solid as they’ve ever been.

Nicholas Power is a Canadian born photographer from Whitby, Ontario. He has been photographing live shows for three years, and is now getting into shooting for media outlets. He is currently a member of a band called Punchu, and is enrolled in Humber College's Creative Photography programme.
RELATED ARTICLES
dinosaur Jr.live reviewthe opera house

by Jen Vasey on September 18, 2012
Dinosaur Jr. I Bet On Sky Jagjaguwar I Bet On Sky is Dinosaur Jr.’s third album by the reunited original line-up of J Mascis, Lou Barlow and Murph. Opening track “Don’t Pretend You Didn’t Know” [...]