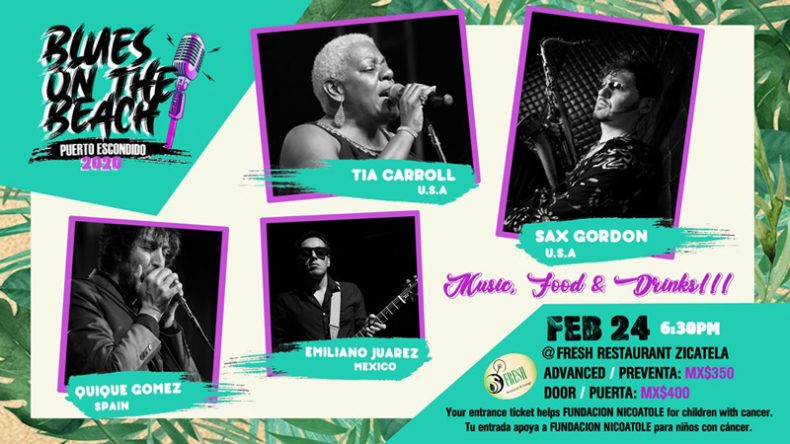 BLUES ON THE BEACH PUERTO ESCONDIDO

For many surfers and snowbirds, Mexico’s Pacific coastal town, Puerto Escondido, is a great place to escape the winter blues. On February 24, 2020, Zicatela Beach, the Mex-Pipe for world surfers, became home to some amazing live music at the Blues on the Beach Puerto Escondido festival.

Juarez opened the stellar evening backed by various members of the Westcoasters, a band well-known in Puerto Escondido that includes the impressive Argentine harp player, Dai Gallo. She held down the stage, a welcomed sight for such a male-dominated instrument. Next up was Madrid’s Quique Gomez, another talented harmonica player and crooner,  who had audience members dancing and singing along with his well-known song, “Don’t You Be Angry.” Sax Gordon, known for his “wild R&B and Blues saxophone” followed next.  Decked-out in a white suit and matching hat, he played a strong set with superb showmanship. It’s no surprise Gordon has recorded widely, and has travelled the world backing famous musicians.

Closing the memorable evening, Tia Carroll’s brassy vocals dazzled the attentive crowd. Carroll, who is one of West Coast USA’s most sought-after female singers, has headlined venues and festivals worldwide, has shared the stage with legends Ray Charles, Jimmy McCracklin and Sugar Pie DeSanto. Her comparisons to Tina Turner, Koko Taylor and Etta James are on point. Carroll’s command of the concert was evident as soon as she took the stage.

The impressive presentation of Blues on the Beach Puerto Escondido was thanks to the new concert organizers: Katushka Villasenor, owner of Puerto’s 20-year live music venue mainstay, Casa Babylon, and Canadian ex-pat Clinton Demers whose beachfront Fresh Bar and Restaurant housed the successful evening. Despite a breezy and unusually overcast day, the weather held out for a phenomenal concert. Additionally, proceeds of the affordable $30 CAD entry ticket were donated to Mexican charity, Fundación NICOATOLE, which assists children with leukemia living throughout Oaxaca state.

“The concert was a success on many levels,” shared Demers. “The guests were very impressed with the caliber of music, as well as the location. The musicians were happy with the location, sound, lighting and how we took care of them while they were here. There are a few things that we will tweak to make next year even better.” Demers has confirmed they are already in discussion to host two concerts in 2021 – one in January and one in February.

Talia Wooldridge is an avid music lover, composer and ethnomusicologist who contributes artist interviews, live concerts, festivals and album reviews for Spill Magazine. She has written extensively on the intersection of music, personal identity and cultural symbolism with an early focus on Latin American Hip Hop and female Cuban rappers. In her spare time, Talia writes, composes music and manages Music Can Heal, a non-profit that brings live, award-winning musicians to inspire healing in hospitals, hospices and communities in need. Her next project is an interactive music-travelogue exploring music cultures and music travel around the globe. Follow her here: www.taliawooldridge.com + www.movetoyourownbeat.com.
RELATED ARTICLES
live reviewmexico