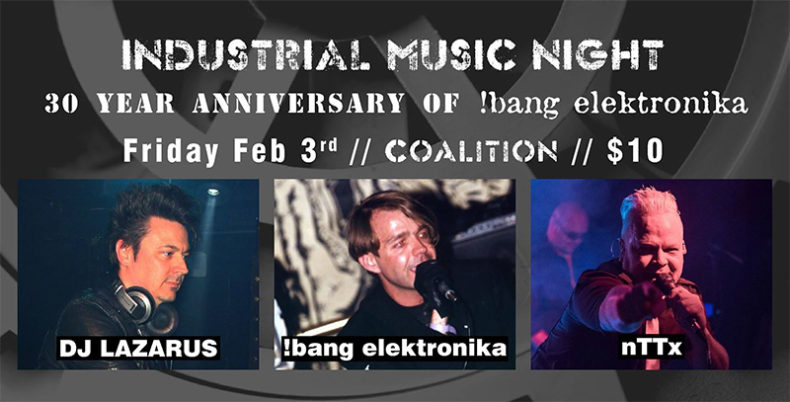 As I reached Coalition, Sam, the hardworking and ever smiling doorman of many Toronto alternative events, announced that nTTx was doing a sound check; they were playing a revamped version of Depeche Mode’s “New Dress”. I admire the dedication that this band puts into their performance, and with the brief taste I was presented with upon entering the venue, I knew I was in for a treat. A double whiskey later, the band took the stage, their lights programmed in perfect synchronicity with each song, and their set impregnated with the vibe of special bands that work together in such a way that it makes the audience feel that we are part of their family. This was my third time seeing nTTx and it was as exciting as last October, when they opened for Assemblage 23 at the Opera House in Toronto. Gord Clement, their front man, was as charming as always; interacting with the audience and spreading his contagious energy. Falls Beautiful got the crowd moving and their cover of Michael Jackson’s “Don’t Stop Till You Get Enough” kept the bodies moving. If you haven’t heard their version, please do. Their new song, “Die For You”, was a terrific sneak peek of what is ahead for nTTx. The closing song of their high energy set was “Bastion”, an anthem for the convoluted times we are facing.

!Bang Elektronika came on stage setting up a complex array of synthesizers, computers, drum machines, scraps of metal, and the pièce de résistance, a “no batteries, no electricity” oil drum. I had seen Dave Rout and Andreas Gregor together before as Techniques Berlin, their minimal synthpop band, one of the many projects these two creative and versatile musicians are part of. Tonight, we were gathered at Coalition for something completely different. !Bang Elektronika released several cassettes in the 80s and 90s and gained popularity in the industrial scene in Toronto and in Europe, especially in Spain and Germany, countries in which they are remembered fondly. They decided to do this show as their 30th anniversary reunion, but this was no nostalgic trip down memory lane, even if all songs were over 20 years old. Not knowing the history of the band, anyone would have thought this sound was brand new. Christopher Drost joined in, shouting and banging metal alongside his former band mates. Songs such as “Take Your Bombshelter”, “Allein Gegen Alle”, and “Music to March To” were all performed with precision and passion; a great combination when it comes to live music. This memorable show ended with “Atzend”, which was an intense and proper finale for a night like this.

Between sets, DJ Lazarus played an array of EBM classics and some more recent and danceable tunes. After the extraordinary finish of !Bang Elektronika, we were all in high spirits, adrenaline filled the air, and many took to the dance floor where the party kept happening until closing time. At the end of the night, when Dave Rout from !Bang Elektronika walked past me, in his hand was a long piece of metal, “What is that?” I asked him, “Oh, just something I won’t be using anymore” he said. I hope he does use it again, because this memorable reunion made it clear that industrial is still alive and banging.

Canadian based Venezuelan Journalist. Passionate about silent films, cats, dancing and live music of genres as varied as EBM, ska, post punk, punk, jazz and swing, among many others.
RELATED ARTICLES
live reviewnttxtoronto

by Trista Whitman on February 19, 2020
SOULFLY @ THE CABOOZE, MINNEAPOLIS (MN) FEBRUARY 19, 2020 Soulfly’s ‘The Summoning’ two month US tour started February 1st and to the delight of the area’s Heavy Metal [...]

by Jason Fitzpatrick on February 19, 2020
WOLF PARADE @ THE MOD CLUB THEATRE, TORONTO FEBRUARY 19, 2020 Wolf Parade returned back to Toronto’s Mod Club Theatre for their second show to continue the [...]