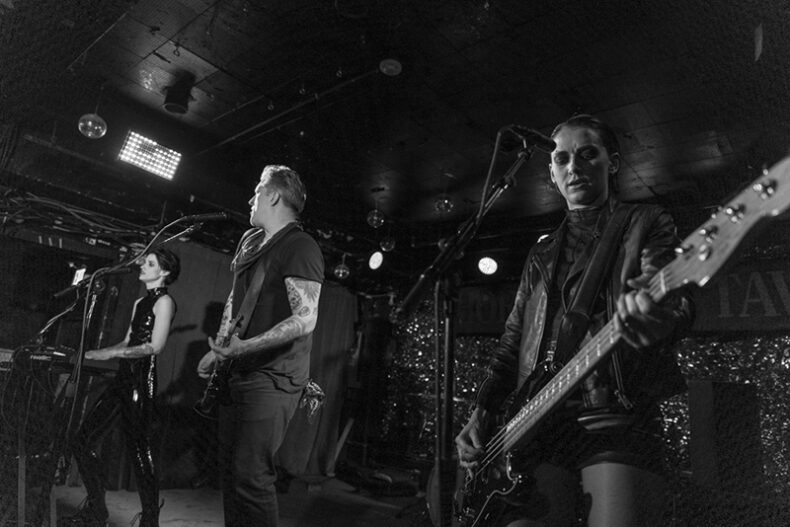 “I haven’t played in this club since 1998. I was four years old,” joked Actors’ frontman Jason Corbett. The crowd collectively smiled and didn’t stop for the next hour as Vancouver’s post-punk outfit made their long-awaited arrival on Toronto soil at the Horseshoe Tavern.

The show was opened by Toronto’s very own AUS!funkt. They pulsed beats through the room that were impossible to ignore, and you couldn’t help but dance. Olivia Korwan’s intense presence on stage is intimidating but engaging and commanding. You also couldn’t take your eyes off Evan Henderson, grooving in his red jumpsuit and sharing vocal duties at times with Korwan. This was the highlight of the group’s set and really elevated the energy in the room. There’s just something about two people sharing vocals center stage that demands your attention and this was no exception. They ended their set on this high and before they could clear the stage the crowd had already began to push their way to the front to prepare for Actors.

After a grueling 21 days on the road with little time off Actors hit the stage with a friendly and positive energy that just felt so welcoming. They were all smiles and it reflected in their playing. The band was tight and had just perfected the setlist by this point. It is a great thing to see a band at the end of a touring cycle and the crowd was here for it. Halfway through their set they went into “Strangers” that kicked off with the bass tone of Kendall Wooding, that even the historic walls of the Horseshoe Tavern would appreciate. This was followed closely by the thick bass drum of Adam Fink. The room was in a frenzy by this point, and it was hard to find a body that wasn’t dancing along. On “Love U More”, Wooding and Shannon Hemmett handled the backing vocals beautifully. As the set went on, the satisfaction was on display in the form of sweat and smiles throughout the room. Hopefully it won’t be too long before they make their return to the city of Toronto again.

by SPILL NEWS on February 14, 2022
ACTORS ANNOUNCE NEW TOUR DATES FOR SPRING NORTH AMERICAN TOUR ACTS OF WORSHIP OUT NOW VIA ARTOFFACT RECORDS Kicking off in Detroit, Michigan and crisscrossing between Canada and the USA, the ACTORS tour in support of the band’s sophomore [...]