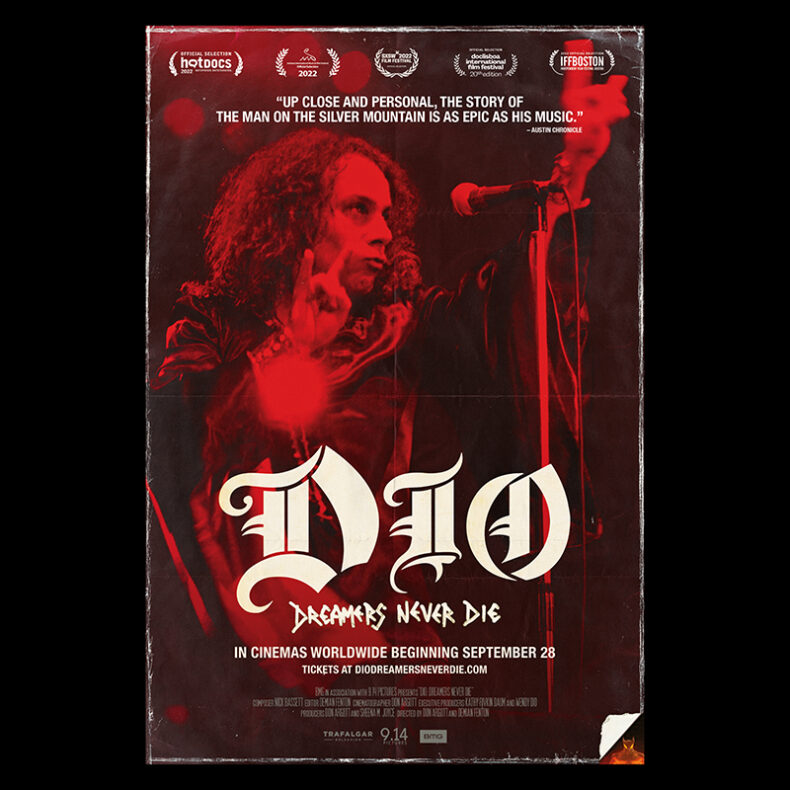 Born in New Hampshire in 1942 and raised in Cortland, New York, an army kid named Ronald James Padavona learned how to play the trumpet at the age of 5 and listened to opera as a child. By the time he was a teenager he was already performing in a rock and roll band, before the Beatles. How did he become Ronnie James Dio; one of the greatest heavy metal singers and icons of all time? That is the subject of the new documentary: DIO: Dreamers Never Die which debuted at the SXSW film festival this year and is now screening across select theatres. The film was directed by Demian Fenton and Don Argott, best known for their production work for the film Rock School.

While the production is not as slick as some heavy metal docs (think Sam Dunn and Banger Films), it is nevertheless a worthy retrospective on the life and musical career of the late Ronnie James Dio. We learn about his early connections with Deep Purple and how got hired by ex-Purple guitar genius Ritchie Blackmore to front Rainbow. We discover what inspired Dio’s lyrics about magic. dragons, rainbows, wolves, angels and demons. We get an inside glimpse into how Dio replaced Ozzy Osbourne in Black Sabbath and how he brought the who’s who of popular heavy metal artists together in the 80s to fight hunger in Africa.

From altar boy to heavy metal god who invented the ‘devil horns’ still used by millions of metal fans around the world.. A small statured man with a majestic voice who became a larger than life figure to generations of headbangers and who influenced thousands of bands.  A documentary on Dio was long overdue and this one delivers.  We hope we get a Dio biopic one day

SPILL MAGAZINE strives to keep our readers up to date with news and events in the music industry. We keep you informed of the most recent information regarding new releases, tour dates, and information items about your favourite artists.
RELATED ARTICLES
black sabbathdeep purpledio
6.0

by Gerrod Harris on April 22, 2022
Jazz Sabbath Jazz Sabbath, Vol. 2 Independent Reimaging catalogues from classic rock artists into the jazz context seems to be a growing trend of mixed results. The latest record [...]

by Gerrod Harris on December 12, 2018
BEEF, METAL, AND TIME TRAVEL A CONVERSATION WITH MAC SABBATH MANAGER MIKE ODD I first heard of Mac Sabbath a couple of years ago when they [...]