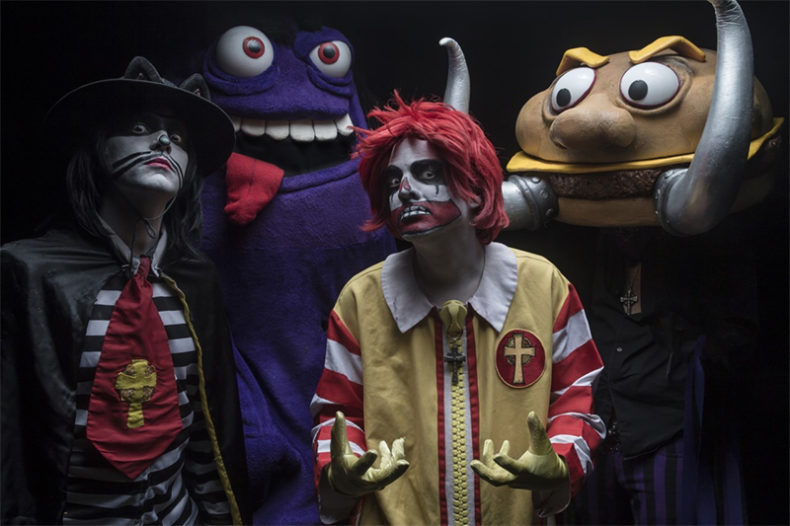 I first heard of Mac Sabbath a couple of years ago when they went viral as they made headlines across some of the biggest media outlets. While some enjoyed it for the sheer novelty of a fast-food themed Black Sabbath cover band, the band has toured across the UK and all across America and, as of recently, Canada. In celebration of their recent achievements, I spoke with the band’s manager, Mike Odd, as the band themselves revel in a level of anonymity which, as I learned, goes deeper than you would ever believe.

For starters, to refer to Mac Sabbath as a Black Sabbath cover, tribute, or parody band, does not seem to do them justice. The members – vocalist Ronald Osbourne, guitarist Slayer MacCheeze, bassist Grimalice, and drummer The Catburglar – may parade across stage dressed as their fast-food counterparts, but their work is far more than dress up and cover tracks. Odd tells me “it’s more than just a band. Calling it a cover band, or a tribute band, or a parody band doesn’t illustrate what it really is. The problem is I haven’t really found a way to truly illustrate what it is”. Certainly, there is an element of tribute and parody to Mac Sabbath as they rearrange and write lyrics to Black Sabbath songs to fit with their fast-food aesthetic (“Sweet Leaf” becomes “Sweet Beef”, “Paranoid” becomes Pair-a-Buns”); however, their lyrics and overarching message goes beyond parody as they are politically critical of the fast food industry and of such things like GMOs, which effectively adds a level of satire to the band. Odd continues “I don’t want to say it’s a heavy metal comedy show, but it is; it’s a comedy show, it’s magic, it has a social message, it has a big theatrical arena type stage show that you wouldn’t expect on a club-sized stage. Their show has so much going for it that no one expects; it’s like a whole new experience”. With that in mind, it is an impressive feat alone that a band of this manner can tour internationally. It’s even more surprising when you consider that the band has only released a handful of singles, the most recent being “Sweet Beef” earlier this year. 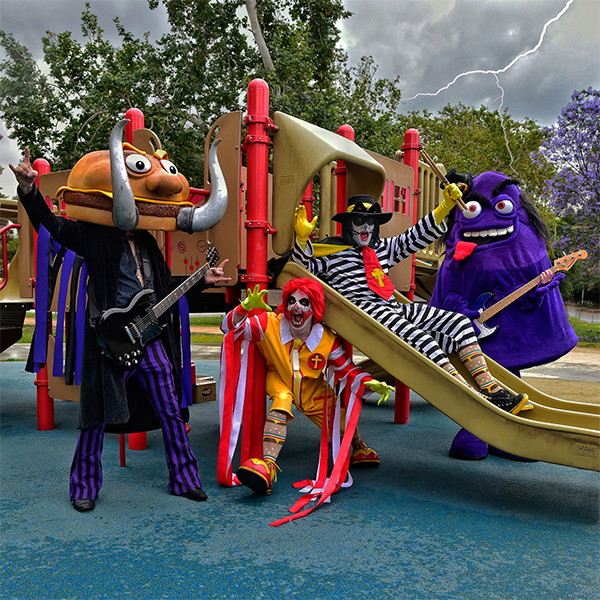 What is perhaps more curious than the success of Mac Sabbath, is their origin and their intent on remaining anonymous. “Ronald Osbourne is a mystery, wrapped in an enigma, wrapped in a hamburger bun. I have no idea what his real identity is, I first met him through an anonymous phone call and ended up going to the basement of – what I imagine to be an illegally run – burger joint to watch these mascots play these Black Sabbath riffs and screaming about Monsanto and GMOs, and this crazed clown is telling me I’m the one who’s going to help manage them.”, Odd tells me about how he first got involved with the mighty Mac. He goes on to tell me “there are a lot of questions I just don’t have the answers to and I feel as though they’re better left unknown.” “I don’t know who they really are; I haven’t even seen them out of costume… Ronald maintains that he travelled here through the time space continuum from the 1970s to save us all from the current state of music and food and bring us back to when rock and sustenance was organic. He has all these theories that if he is exposed it will mess up this reality – it’s all very Rick And Morty”.

Hands down, my brief conversation with Odd was the most bizarre interview I have been a part of and will likely hold that title for some time. He tells me that himself, as the band’s manager, working with Mac Sabbath, it is always an unexpected and strange adventure. He also assures me that he is not in fact secretly a member of the band moonlighting as their manager by day for the sake of the press and other logistical necessities – although he does bring up the rumor that Dead Kennedy’s vocalist Jello Biafra may be Osbourne, “if he is, I wouldn’t know about it”. Regardless, the rise of Mac Sabbath feels unprecedented. Even with the persistent simplification of being a comedy, parody, or tribute band, Mac Sabbath has managed to perform alongside the likes of Slipknot, Marilyn Manson, Kiss, and Mötley Crüe at Download Fest while also touring across the UK and North America. Despite all odds, it would seem as though that Mac Sabbath are only just getting started and are showing no signs of letting up.

A passion for music has always been a part of Gerrod’s life. As a young boy, he was raised on a steady diet of the music from The Chili Peppers, Aerosmith, The Stones, Prince, and others from his mum. Raised in the GTA, Gerrod continued to foster his love for music by attending a wide range of concerts and learning the drums. His unapologetic passion for music has no bounds and has spread to a wide variety of styles, whether it be the 90’s rock that sound tracked his teenage years, the jazz he studied in university, or his newfound love for hip-hop. He recently received his bachelors in music and education from York University and is passionate about writing and reviewing good (and less than good) music. Gerrod is also the drummer and songwriter for a Toronto based rock & roll band, One In The Chamber.
RELATED ARTICLES
black sabbathfeaturesozzy osbourne

by Andre Skinner on January 16, 2016
Black Sabbath Past Lives (Reissue) Warner Music Canada With the end of Black Sabbath’s career rapidly approaching, the band strategically reissued some of their best albums [...]