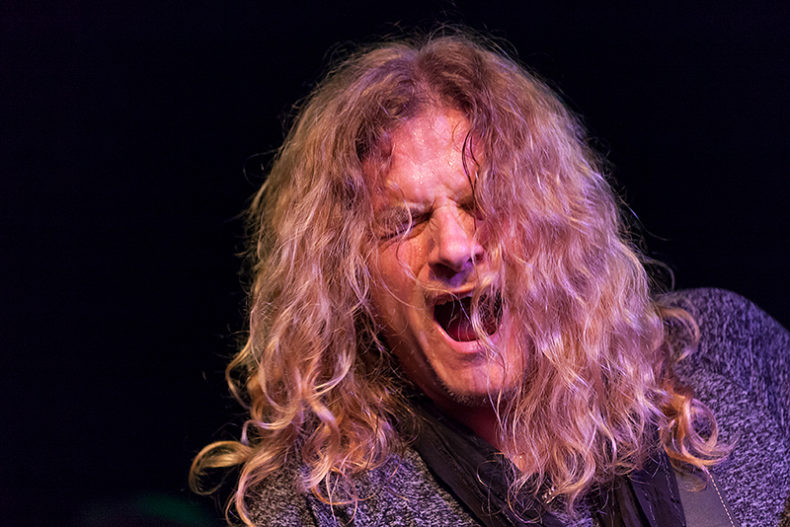 THEY SAY DON’T MEET YOUR HEROES

The very first time I ever heard of Frank Hannon was when my eyes and ears feasted on his soulful guitar playing solo in the video Love Song on Much Music. It was the same night that I discovered and fell in love with his band Tesla, in the spring of 1989.

It was the beginning of the end for a great decade of music. Heavy Metal was King in those days. The plaid wearing giants from Seattle had not yet awakened.

It was a golden era of Guns N’ Roses, Metallica, Ozzy Osborne, Cinderella and yes, Poison.

And a little bit of the way it was.

Those were the glory days, filled with layer and layer of teased out hair and tight, thigh suffocating spandex, that sometimes left very little to the imagination.

Those were days of heavy riffs, melodies and guitar solos. Those were the days of ‘if its too loud, you’re too old’, or something like that, if my memory serves me correctly.

Back then I was a bit reserved and shy. A quiet little kid from Poland.

We ended coming to Canada in early 1985, four years earlier, having run away from an ugly Polish dictatorship, full of hope for a better life. Or at least of not disappearing into the work camps of Siberia somewhere. My dad was a political prisoner and a member of the Solidarity movement. He would have never stopped telling the truth. He would have never stopped. We really had not choice but to leave everything, and make a home somewhere else.

It was a struggle to come to Canada but I joyfully embraced it.

It wasn’t easy to speak English, especially since I was picking up French much faster.  Go figure.

The bigger struggle was my coming of age. It was a real struggle to come into your own when you don’t know much and have a scattering of friends. It was a tough time to figure out where I belonged or how I was going to fit it.

In some ways it saved me.

It saved me from a lot.

It bridged a great divide and closed a gulf of loneliness.

I had no sense of anything musically, prior to 1985. No sense of any musical history, beyond a song or two by AC/DC or Pink Floyd. My entire musical knowledge was a bit sketchy at best, with huge gaps, going back many decades.

In those days, under the Red terror, very few things managed to make their way across the ocean. Music was not able to penetrate the imposing and unforgiving iron curtain.

In those days you could often find me, alone in my room, just listening to music.

I would lay on my bed, which we picked up somewhere on the side of a near by street near Don Mills Road. As a matter of fact, when I look back at all of my pictures from those early days, almost all of the furniture, was brought it from somewhere. It was discarded and unwanted by someone. We managed to furnish our entire home with everyone else’s junk. It gave us little doubt that we were in the land of riches and opportunity.

In that room I would obsessively watch Much Music’s Power Hour, on my big old 20 inch tube television set, with that beautiful crank dial, on the top right hand side, that let you change the channels, one click at a time.

That particular night I saw the video for Love Song.

When it finished, I got up, walked outside, and took the Kennedy Station number 20 bus to Kennedy station, and headed over to A&A Records, on Ellesmere Road. The same record store that was featured in the Barenaked Ladies first official video Lovers in a Dangerous Time. The one where they ride around Scarborough on a pick up truck.

I bought home a cassette tape of The Great Radio Controversy that night, and Frank Hanson’s music and indeed my love affair with Tesla has become the soundtrack of my life ever since.

Sometime this Christmas I saw Frank Hannon’s Facebook post about his upcoming album on PledgeMusic. The opportunity for a meet and greet really intrigued me. Frank  had an album coming out, From One Place to Another: Volume 1, and in between his busy schedule touring with Tesla, he was making one small stop in Columbus and Detroit in mid February.

Winter is a very terrible time to plan anything. You never know what happens.

Storms and heavy snow often ruin many best laid plan, but regardless, I decided that the odds and likelihood of me ever heading out to California to see him play out there, carried far worse odds than the impending doom of winter weather.

“They say don’t meet your heroes,
and they might be right,
but then again,
they’ve never met Frank Hannon.”

I had the privilege to shake hands with Frank Hannon on February 18, 2018.

He was playing the Diesel Concert Lounge and Bar, halfway between Detroit and Sarnia. A lovely place with beautiful concert venue, a bowling alley, and a room full of retro pin ball machines. Their pizza and beer is not bad either.

I’m not sure what happened with the promotion of the show, I am definitely not in the know, but when I arrived the show had changed to not only a free concert, but also an all ages show.

It was sad to see the venue under capacity, but to Frank Hannon’s credit, he did not hold anything back. He was a consummate professional. The person I imaged him to be.

It would have been very easy, when he saw a sparse crowd, especially after all the traveling he had done recently, to just bang out a few songs, to go through the motions, and call it an early night.

No one would have known.

No one would have cared.

No one would have noticed.

I had a chance to see the rehearsal that afternoon and it was amazing to see how meticulous the sound had to be. It took close to an hour before Frank Hannon was satisfied with the way everything sounded.

He had a very humorous banter. He was all business. It was a pleasure to watch.

Again, he didn’t really have to be that meticulous, but it showed that he cares deeply about his craft. It shows the gratitude and appreciation he has for what he gets to do for a living. Being musician is a gift, it is not a divine right.

Above everything else, it really showed how much he loves sharing his music.

I had my picture taken with him and we chatted for a bit. I also made a friend that night. A lovely man named Vaughn who has some wicked pictures of Van Halen from the late eighties. Its amazing what you can capture with a little camera and front row seats.

What struck me most about the guitar virtuoso, Frank Hannon, was his openness. His genuine and honest disposition. His unpretentiousness and realness. At times the subject matter would turn for a moment to something perhaps a bit sensitive or very personal, but he answered candidly. He spoke what was on his mind unabashedly. He said what he felt, without a worry of being quoted, or misunderstood.

He seemed like a person at peace with himself.

Happy to be himself. Happy to live in his own skin. Or at least thats how it seemed.

He has a very famous father in law, Dickey Betts, from the Allman Brothers Band, and his father in law, is one of the many reasons why Frank is on the road, in-between all the Tesla gigs, promoting his new album From One Place to Another: Volume 1.

I’ve had a chance to listen to the album several times on the way there and back, and it is now purposefully stuck in my cd player in my old Hyundai. This album is a keeper. Especially this first volume of the three volume set. The songs have has chosen to cover are great and are very meaning. Besides the opening track Blue Sky, my favourite is his cover of Lukas Nelson’s Four Letter Word.

He loves the softness of the acoustic guitar, and the bravado of his electric ones.

He played for a long time that night. I was somewhat surprised.

He played songs from all of his solo records, and of course the night would not have been complete without a little bit of Led Zeppelin.

He even teased the audience with a couple of guitar intro to Love Song and What You Give. But the night was not about Tesla, it was about Frank Hannon. His craft. His soul. His ability to connect with us.

They say you should not meet your heroes, but I think you should.

I have happily shaken hands with mine. I posed for the customary picture, so I could remember the night, and to top off the night, I was granted a media pass and permission to shoot the whole show. I hope you enjoy some of the photos that accompany this article.

Frank Hannon is on the road again, and if you have a chance, go out and support him.

If you live to far to go and see him, pick up a copy of his new album, or stream the living shit out of it on whatever platform you call home.

I can’t wait for more music from Frank and from Tesla this summer.

I hope I get a chance to say hello some day.

There is nothing that lifts the soul like live music.

I urge you to go and meet your heroes.

Don’t worry about what others say.

And you only live once.

Grzegorz Kieszkowski originally hails from Bydgoszcz, Poland. After his father was released from prison in 1984, for his involvement with the Solidarity movement, Greg and his family escaped to Canada in 1985. He makes Cobourg his home, along with his wife and two small children. Greg is a graduate of York University, with a double major in English and Philosophy. Music has always been in his blood, and although his tastes have matured, he will always have a soft spot for the Metal days of the late 1980’s. He is a full time English teacher and a professional photographer. Part of the allure of writing is the possibility of conversation, and he would love to hear your comments and opinions. Please feel free to visit his personal website - grzegorzkieszkowski.com.
RELATED ARTICLES
detroitfeatureslove song