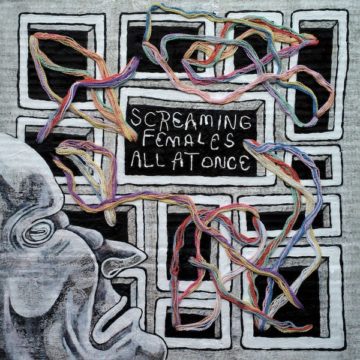 Screaming Females
All At Once
Don Giovanni Records

Screaming Females’ All At Once is an excellent overall album, though with a few notable weaknesses. The group’s latest work encompasses many different styles and sounds, and often attempts to combine these elements in interesting ways. Unfortunately, about one-third of the album’s fifteen tracks is effectively filler material, which begs the question: why not cut the fat and instead produce a more well-rounded nine or ten track album?

The standout track on All At Once is, without a doubt, “Agnes Martin”. This call-back to mid-90s alternative rock (think Marcy Playground blended with Tool) espouses everything great about the album in one song. Similarly, “Black Moon” and “Bird in Space” showcase some exemplary vibrato vocals by vocalist/ guitarist Marissa Paternoster, in addition to demonstrating her instrumental skill range (both soft and grungy guitar riffs, often mixed together seamlessly). Abbate’s and Dougherty’s rhythmic contributions are also noteworthy, especially the bass lines and drums in “Glass House”, “Black Moon” and the subtle yet satisfying “End of My Bloodline”.

However, it’s the album’s sleeper track, the conclusive “Step Outside”, that really deserves some special recognition. “Step Outside” explores a variety of different musical styles and tempos, and at times seems to almost channel some Sublime classics like “40 oz. to Freedom” or “Same in the End”. This song is by far one of the best on the album, and I personally prefer it to even “Agnes Martin” (even after repeated play, “Step Outside” continues to offer something new with each listen). To contextualize further: “Step Outside” is a perfect final track and epitomizes skateboarding music 101— it wouldn’t be out of place on the soundtrack of a Pro Skater or Skate game.

Still, All At Once suffers slightly from several filler tracks. Songs like “I’ll Make You Sorry”,  “Dirt”, and “Deeply” are perfectly neutral, in that they aren’t terrible but also don’t offer anything novel or worthy of further discussion. These forgettable songs aside, Screaming Females’ All At Once is definitely worth checking out, especially for anyone nostalgic for mid-90s alt-rock.

The Spill Magazine is a Toronto-based online publication dedicated to covering the independent music scene with a strong focus on our thriving hometown talent. Our writers bring you up-to-date news, in-depth features on musicians and reviews for the latest CD releases. We also travel to the front lines for all local festivals including Canadian Music Week and North by Northeast. Don’t forget to check out our Facebook and Twitter pages for all daily Spill updates.
RELATED ARTICLES
album reviewsdon giovanni recordsscreaming females
9.0