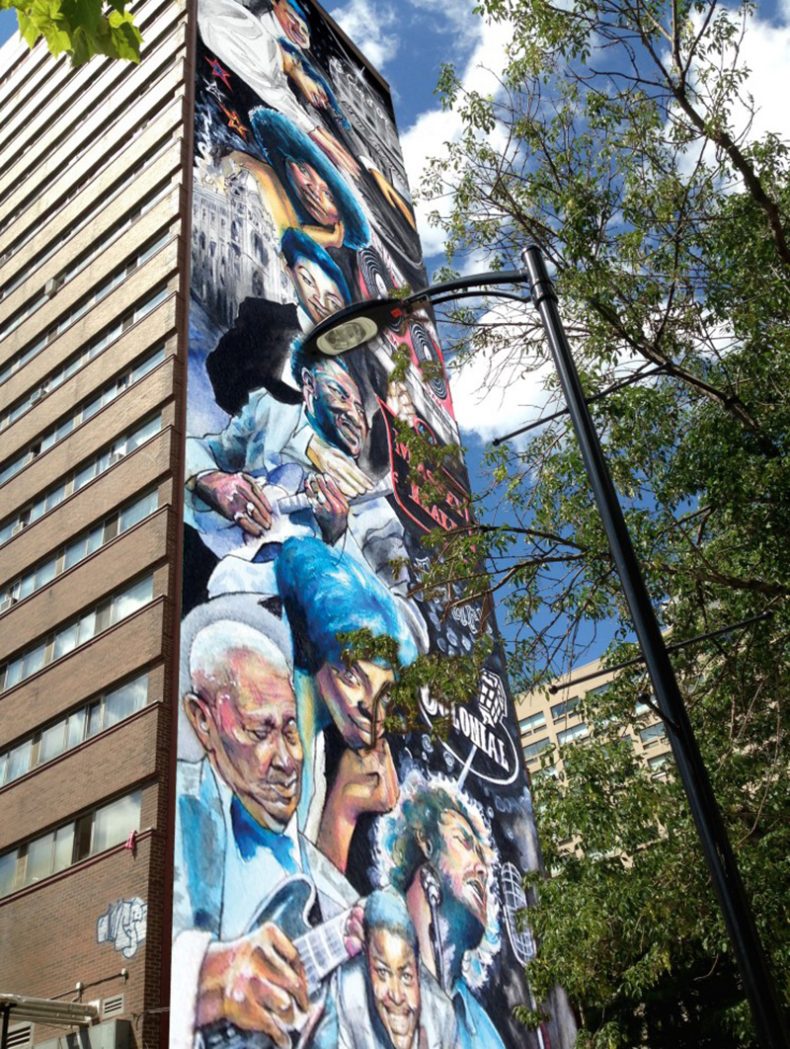 Artist Adrian Hayles is bringing the musical vibrancy of the ’50’s and ’60’s Toronto back to Yonge Street with his ambitious 22-storey fresco.

A crowd gathered in Granby Parkette to celebrate the launch of the visual rendering, which upon completion will feature music icons Ronnie Hawkins, Glenn Gould, Diane Brooks, Jackie Shane, Muddy Waters, Shirley Matthews, B.B. King, Gordon Lightfoot, and Oscar Peterson. The mural is being commissioned by The Downtown Yonge Business Improvement Area and will cover the entire north face of 423 Yonge. Executive Director Mark Garner said the work “fits perfectly with the vision for a vibrant Yonge Steet — combining visual and musical artistry.”

Legendary musicians Gordon Lightfoot and Ronnie “The Hawk” Hawkins attended the event. They addressed the audience and these flourishing times with meandering memories and anecdotes, mentioning music luminaries like Conway Twitty, The Band, Bob Dylan, Kris Kristofferson, and Bo Diddley— all artists who left their mark and legacy on our city. In spite of his age, The Hawk maintained his wild, rompin’ reputation; “Keep the women back!” he called out as he was welcomed to the stage.

The mural is an ode to these glory days of Yonge, when the strip was alit in lurid neon and live music extended from Jazz, to Folk, to Rockabilly, and beyond. The fresco will incorporate recognized markers of the scene: the dual discs of the Sam the Record Man and signs for famed music venues like Steeles Tavern and Massey Hall.

The project is expected to be completed in three months, at which point an interactive element is to be incorporated whereby a smartphone app will help bring this musical history to life.

Elizabeth is a Toronto via Caledon writer whose rural upbringing left a lasting love of anything with a banjo and an upright bass. She scours Toronto venues for both the musical talent and the beers on tap.
RELATED ARTICLES
adrian haylesb.b. kingfeatures

by Elizabeth Andrews on August 17, 2017
SECOND MUSIC MURAL OVER DOWNTOWN YONGE August 17, 2017 @ McGill Parkette, Toronto A little under a year ago, a crowd gathered at Granby Parkette for the unveiling of a towering fresco [...]