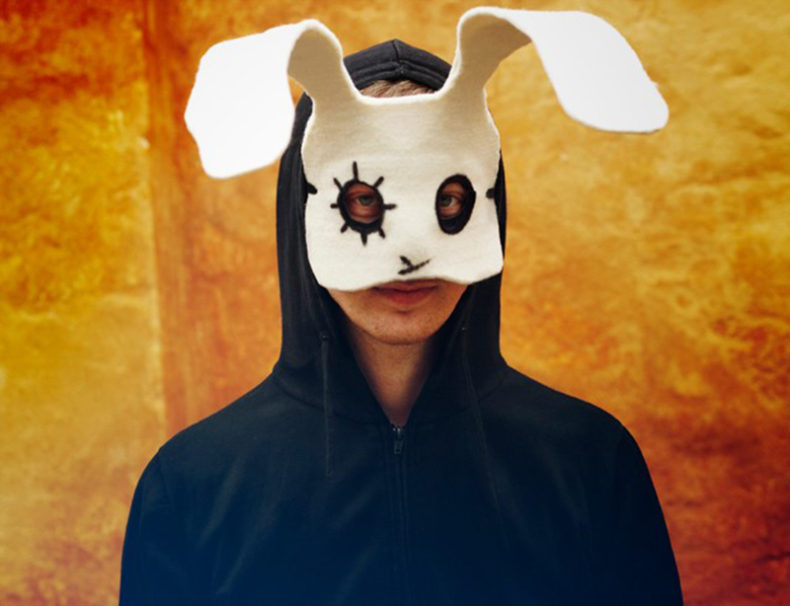 A CONVERSATION WITH BRIAN BATZ OF SLEEP PARTY PEOPLE

“I started writing music in 2008 and when I recorded I ran my vocals through pedals, you know for guitars and keyboards, and it gave my voice a weird sound.  When I listened back, it sounded like I imagined bunnies talking,” Brian says as he speaks to me from Denmark.  “Then I thought it would be really cool to wear a mask on stage, and everyone in the band wear a mask.  I was never a front man, I was always on guitar or drums, so to be on stage singing was different for me, and wearing a mask was a relief. I googled ‘creepy bunny masks’ to find something to inspire me and I found this beautiful picture of a child in a hallway wearing a bunny mask.  After getting permission from the photographer I used that photo on the cover of my first album, released in 2010 Sleep Party People,”

Since 2010, Brian, as Sleep Party People has released two further albums, We Were Drifting on A Sad Song (2012) and Floating (2014).  All three of his albums were extremely well received and he built a solid and loyal audience.  This June, Brian is getting set to release his fourth album, Lingering, and with the album comes a new record deal.  This album is being released in North America by Joyful Noise.

“This is terrific.  I knew the label and loved their stuff and I wanted to sign.  This is also my first U.S. label deal.”

This is good news for fans of this talented individual.  It should make getting his records easier.  Also, as any fan who knows Joyful Noise records, this means a beautiful vinyl pressing and great packaging.

Lingering is a grand sounding album, 12 songs, each with “different moods”, and as usual Brian plays almost everything on the album as well as producing and engineering the album. “It doesn’t take that long,” remarks a very modest Batz.  And recording alone does not seem to faze Brian.  “It can be very liberating,” he says. “I am trying to hit that specific moment, which can get frustrating.  But I have a bunch of good friends here in Denmark, and if I get stuck I send them the songs and I get useful feedback.”

For Lingering, Brian did get some help from  a couple of guests on the album, including Beth Hirsch (a solo artist in her own right, but also known for her work with Air). “I received an email from Beth, she had listened to Floating, and was into collaborating.  I knew her work and her work with Air (Moon Safari album), which blew me away.  I was honoured to record with her.”

The other guest is Luster, a Danish band, with whom Brian had worked and felt that they could add to the sound of the album. “The music scene in Denmark is better than ever.  Lots of different styles, sounds.  Everything from pop to alternative to punk.  There are some good labels and there seems to be a lot of eyes focused on Denmark right now.”

A new album also means a tour.  Brian has assembled a band (‘all really good friends”) and is sent to rehearse and get on the road.

“The band is totally free to interpret the songs.  Everyone brings ideas to the songs.  We will be doing the new album but also older songs as well.  More progressive and more aggressive live.  I don’t want to just play the album louder, I want this to be a live show.”

Brian Batz is a very talented artist who loves music, both playing and listening (“I am a vinyl nerd, love collecting records”).  Lingering may be his best work yet, and that is saying something when you listen to the music that he has produced under the name Sleep Party People.

Lingering will be released on June 2, on Joyful Noise Records.

Born and raised in Whitby, Aaron discovered music through his love of The Beatles. This led to a career in radio, writing for various publications, and ultimately a radio show about The Beatles (Beatles Universe), which ran for over four years. When not immersed in music, Aaron enjoys spending time with the loves of his life -- his wife Andrea, and daughters Emily and Linda (all of whom have an intense love of music too).
RELATED ARTICLES
featuresjoyful noiselingering