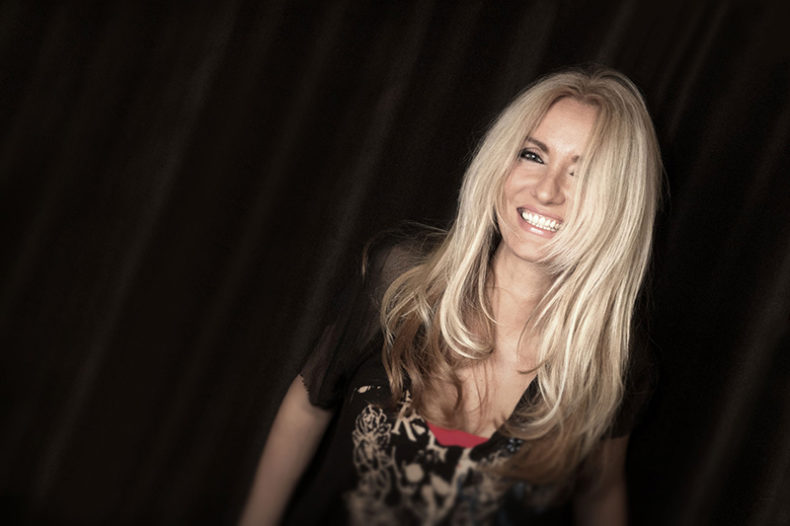 A CONVERSATION WITH CANADIAN QUEEN OF ROCK & WINEMAKER SASS JORDAN

Sass Jordan has been a rock star, actor, Canadian Idol judge, and a Juno and Billboard award winner… is there anything she can’t do? Now, she has added “winemaker” to her list of accomplishments. Earlier this month, Vineland Estates released two new wines bearing the venerable diva’s name. “Kick Ass Sass Red”, a Cabernet Franc, And “Kick Ass Sass White”, a Chardonnay and Riesling blend, have been available online and at Vineland Estates winery in Niagara since the beginning of the year. With the unveiling of these products, Sass Jordan became the first female Canadian music star to release a line of wines.

Since breaking onto the scene with her 1988 album, Tell Somebody, Jordan made a name for herself as a no-holds-barred, bona fide star, always moving forward and doing things her way. Little wonder that she has enjoyed such career longevity, building a loyal fan base and choosing projects she is passionate about. But why wine? Jordan replies, “It’s just like music. I love music – I love wine! Back when I was planning the live shows for the Racine Revisited tour, my whole idea was like, sitting on the stage, like we were in somebody’s living room. We’re all together, and there are bottles of wine, and there’s candles and there’s carpet, and we’re all singing together, like ‘Kumbaya’ (laughs).

“That’s how it started. I came up with the name. I thought, if I have a wine, I’m going to call it “Kick Ass Sass”, cause it rhymes and it’s my name, and it has the word “ass” in it… All my favourite things! It’s almost like, if you build a structure in your mind, all the components are drawn to you. I don’t know what it is, some kind of universal magnet!” 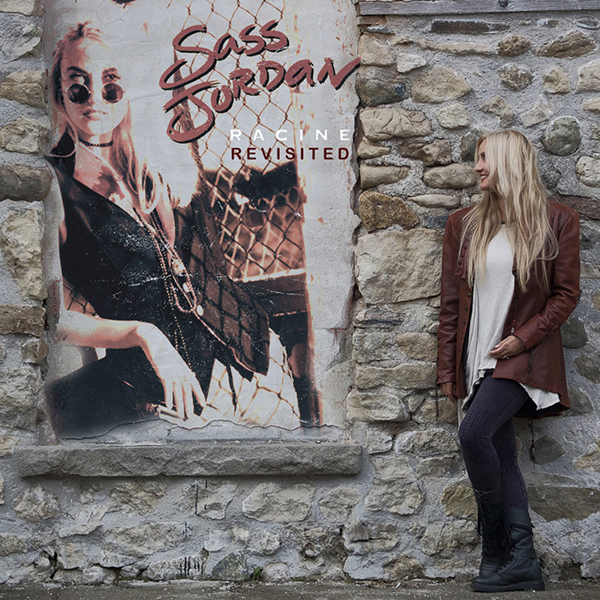 As a wine lover, Jordan is understandably thrilled with her new venture, adding that, “It’s like a dream come true – who gets to do that? It’s exactly like when I started in the world of music. I didn’t have a clue what I was getting into. I just knew that I loved music, and I wanted to do it. I wanted to do it with certain people who I loved and adored. I don’t know how the heck I did it, but I ended up doing it. It’s kind of like that with this wine thing. I woke up one morning and thought, ‘Wouldn’t it be cool to make my own wine?’ And that is exactly what happened. Complete luck!”

Jordan’s entry into the wine business did not happen overnight. She and Vineland Estates’ vice president and winemaker Brian Schmidt had been fermenting this plan for over a decade. Jordan notes, “We had originally met at some event at the hotel I was staying at when I was doing the TV show Canadian Idol. I was in the restaurant – it was my first introduction to Niagara wines. I hate to say this – I had been under the illusion that Canadian wines are not as good as other wines. The Canadian wine industry would be really great if we could get some of the incredible wines that we make in Canada to be more well-known. It’s a challenge, and it’s gonna happen, because we make some of the most glorious wines I’ve ever tasted, and I’ve been all over the wine world. We make some incredible wines here.

“So, what happened was, when I met Brian Schmidt, I thought, ‘Ugh, gawd – Canadian wines…’ He said, ‘Try some of this’. He had some of his wines there, and I got to taste them. I was so impressed that I went to the producers of Canadian Idol, and I said, ‘Listen, guys – why do we not have a Canadian wine backstage in the green room?’ And they were like, ‘Good point’. I said, ‘Taste this’. They tasted it and they loved it. From that moment on, we carried Vineland Estates in the green room at Canadian Idol. That was how Brian and I initially became friends. We just remained friends over the years, but it never occurred to me that he would end up making my wine”. 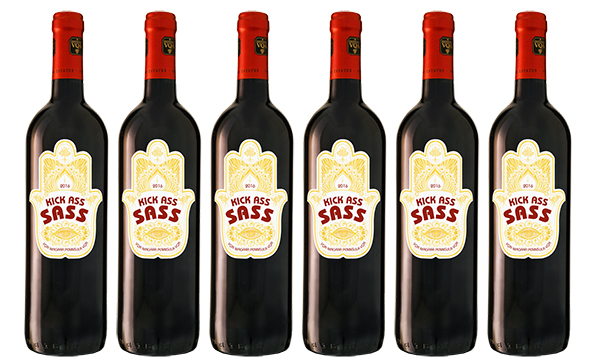 Some time later, Jordan and her manager, Peter Wark, arranged a meeting with Brian Schmidt. “I said, ‘Listen, I know this guy. He’s a winemaker in Niagara, and maybe he can point us in the right direction, to give us some ideas of who we should talk to’. We went to lunch with him, and we’re sitting there, shooting the breeze, and I said, ‘So, Brian, where would I start, if I want to make a wine?’ He looked at me straight in the eye and said, ‘Oh, don’t worry about that, we’re going to make you a wine’. At which point you could have heard a pin drop, because Peter and I look at each other, like, ‘What the F-? Did he just say that?! What??’ That is how it happened. Never ever did it occur to me that he would want to do it. I thought he was way too out of my league! I’m just some, you know, celebrity singa over here! It was so awesome! Made me happy”.

Unlike some celebrities who simply put their name to a product, Sass Jordan was very involved in the development of her wines. She explains that, “with any wine, it’s about its story, and what it tastes like. To me, it’s got a lot to do with the story. The story is what sets the context for the taste. We spent a number of days working on blends and tasting, et cetera. I went through a bit of aspirin, and a lot of water (laughs)! And then, of course, the label on the bottle – that was a labour of love as well. I worked with their in-house graphic designer/artist person, Melissa Proudlock, who is a genius. It was absolutely a load of fun, from the beginning to the final product. I’m very proud of it, and I’m very, very excited to share it with my friends and my fans”.

Interestingly, Jordan was not previously a fan of the variety of grape used for the Kick Ass Sass white blend: “Brian Schmidt tricked me!” she jokes. “But the fact of the matter is, the Chardonnay that I associate with the word ‘Chardonnay’ is oaked Chardonnay, which is a very popular way of treating the Chardonnay grape – they oak it. And the taste and the smell of oaked Chardonnay makes me hurl away! I cannot stand it.

“Little did I know that the Burgundy and the Chablis – these wines are the Chardonnay grape! I didn’t know that! I am not a wine expert, I know very little about wine, I just know what I like. But I know a helluva lot more about wine now than I used to, let me tell you. So Brian said, ‘I’m going to give you this blend here, then I’m going to do this blend, then…’ Long story short, it ended up being that it’s un-oaked Chardonnay that’s in my blend, and just a touch of Riesling, which adds this whole other sort of dimension to the flavour. It’s a wonderful wine. It’s gorgeous! Who would have known? Brian said, ‘The closest your Chardonnay has ever come to an oak is, I might have carried a basket of grapes under an oak tree!’” 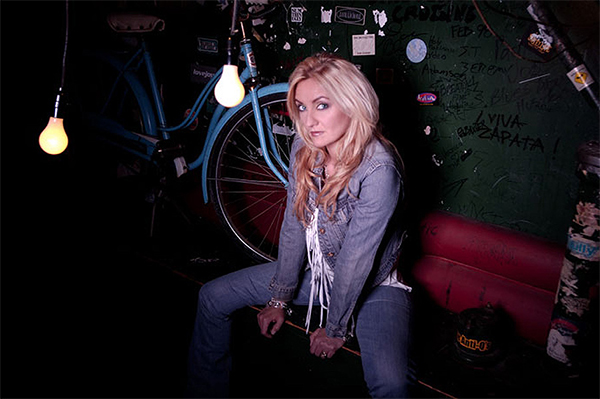 Food and wine pairings are an important part of wine culture, but how about wine and music pairings? The veteran rocker does not rule out a partnership between her concerts and “Kick Ass Sass” wines: “There’s stuff that we’re talking about, but there’s nothing concrete, as of yet. It’s funny, because people have been asking me that. I’m thinking, ‘Uh-oh, we’d better really get on that!’ It’s all dependent on timing and money, and the usual. But if it works out, it’d be awesome”.

Whether or not the music and wine events come to pass, Jordan is planning to hit the road this year, with a concert tour scheduled for The Netherlands in May, and a few select dates in British Columbia in August. Fans can look forward to a few surprises, this time out. “First of all, I’m doing an entirely new setlist. I’m also making a new record, Big Noise. I’m really excited, ‘cause it‘s been a long time since I’ve done that. You forget: I’ve got this huge catalogue. It’s much easier if you don’t have to rehearse every single time you go out. You tend to stay within a certain bunch of songs. I’m like, ‘It’s time for a whole new setlist’, so we’re rehearsing right now, all the stuff that I’ve never done, or also, that I haven’t done in years. I’m really excited about that!”

Is the release of Kick Ass Sass a signal that other female performers might follow suit in the beverage business? Time will tell. In the meantime, Sass Jordan was a good sport and had fun with a little game, suggesting beverages that other female music stars (whether living or passed on) might put their names to. Here are her picks:

Kick Ass Sass is available now at Vineland Estates and online at http://www.vinelandwineshop.com/store

Bryan Williston has been involved in music since he was a young child. A veteran singer, songwriter, and music educator, Bryan has enjoyed playing a multitude of musical genres in a variety of outfits, over the years. Bryan lives in Whitby, Ontario.
RELATED ARTICLES
featuressass jordan