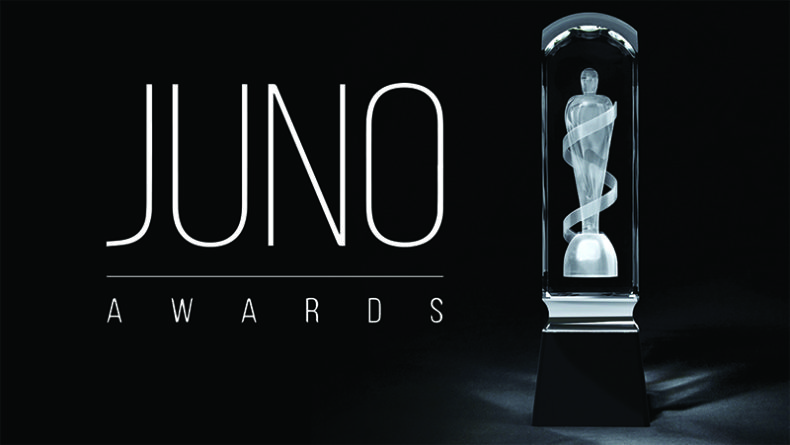 Not only where to start, but where to go, and how many things can be fit into one night – those were probably the most common questions by anyone who was taking advantage of JUNO Week. It was crazy, it was busy, but it was an amazing, all Canadian week with so many captivating things to attend.

Wherever you ended up, I know you had a good time, but with everything that was going on, you had to make some tough decisions on where to go. Spill’s roster for the week leading up to the JUNO Gala Dinner & Awards, and 2017 JUNO Awards Broadcast started off with a behind the scenes tour of the Canadian Tire Centre, where we got to take a look at the beginning stages of the set up for the broadcast. 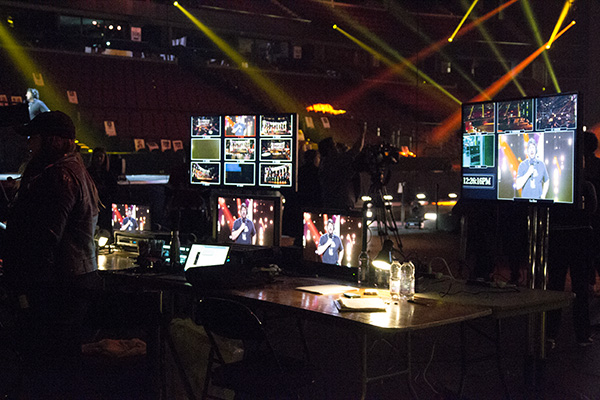 It’s pretty astounding to see a transformation like that, and it amazes even the people involved in the production of the awards. It takes a huge amount of people to get everything together, and they were all hard at work while we were escorted around the building by Lindsay Cox (Supervising Producer, Insight Productions), Allan Reid (President & CEO, CARAS/The JUNO Awards), and Dave Azouley (Technical Producer).

The tour took us from the entrance gate, through the back halls, where we passed the loading docks and saw all of the equipment being unloaded. While we walked the halls, we saw the talent’s dressing rooms, Shawn Mendes’s room standing out because of the mountain of fan mail that he’d received – one fan even sent him balloons. After we saw the dressing rooms being loaded in with outfits and equipment to keep the stars looking their best on their big night, we walked down the ramp into the arena where it all happens. In the beginning stages of a set like that, you get to see all of the markings on the ground that let people know very exact locations for things to go, the supports being put up for the massive amount of lighting equipment that goes into the production, as well as a lot of the gear needed to keep everything working. While it looked quite bare, looks can be quite deceiving, because this was just a stage in the big picture, and every stage is just as important as the next. 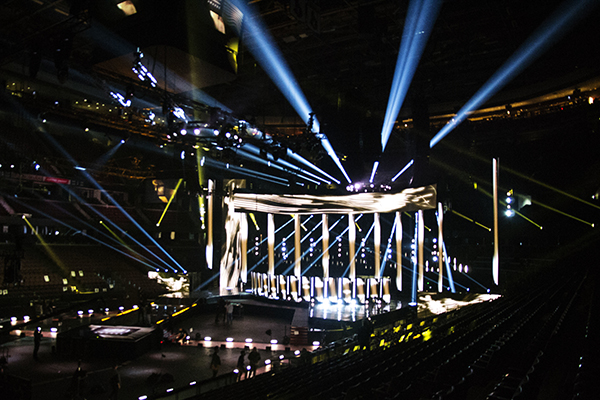 On Thursday, we headed to the JUNO Cup Practice, where rockers and former NHL players get acquainted (or re-acquainted in a lot of cases) and get the chance to skate the ice, get to know each other, speak to the media about the event and what it means to them, and most of all – hit the ice for a practice game to warm themselves up for the game the next day. Among the many participants, we got to speak to Missasauga’s own Jon Gallant (Bassist, Billy Talent). Gallant said that this is his favourite part of the week, and that Ottawa holds some fond memories for him as well. You will find the full conversation in the interview section of our website. Gallant was among many greats in Canadian music and hockey. The former NHL players had a pretty first rate line up, including five local players from the Ottawa Senators, Daniel Alfredsson, Brendan Bell, Chris Phillips, Jim Kyte, and Luke Richardson. Lead by the legendary Ottawa 67’s coach, Brian “Killer” Kilrea, the rockers weren’t doing to bad either. Among the rockers were father and son Jim Cuddy (Blue Rodeo) and Devin Cuddy (Devin Cuddy Band), Amanda Rheaume, Dallas Smith, Sam Roberts, Beard Guy (Walk Off The Earth). Both teams were jam packed with some pretty fine-tuned players, whether they live their lives behind an instrument, microphone, or hockey stick, Canada seems to breed good hockey players. 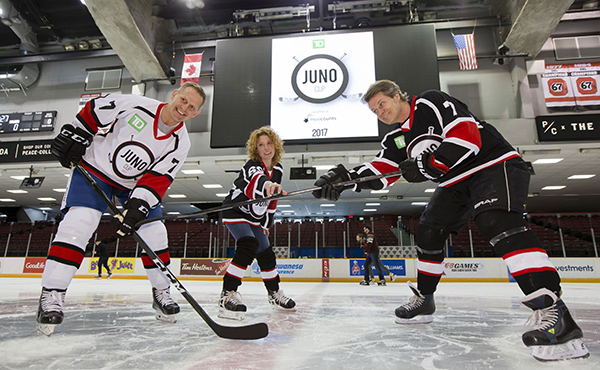 This is where things started to get really busy. The days were full and the nights were busy and late, with bars serving until 3 a.m. and staying open until 4 a.m. for JUNOfest.

Friday morning took us to our second view of the Canadian Tire Centre in a later production stage, one that allowed us to also attend an open rehearsal while at the set reveal. The room was much more full and almost fully lit, the stage had been built, and there was much more equipment. 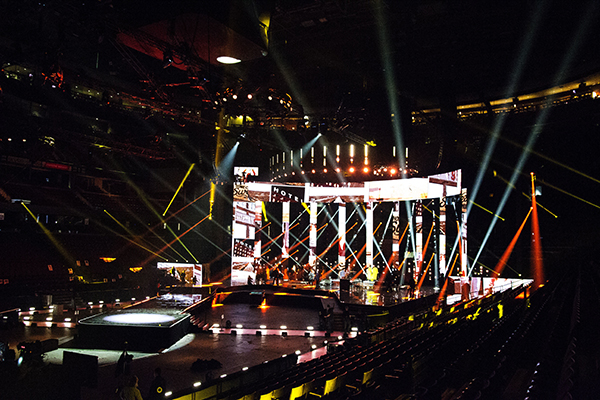 The production team was hard at work, as was the rest of the crew, as well as the band that we got the treat of seeing go through rehearsal and speak with afterwards. Hamilton puts out a lot of amazing artists, but The Arkells (nominated for Rock Album of the Year and Group of the Year) have made some really big waves in the music industry lately, and getting to see them rehearse for what was an exceptional performance was quite the treat. The band had a gospel choir, back up singers, and a very well choreographed ensemble. We got the chance to speak to Max Kerman of the Arkells after they’d finished their rehearsals, and he told us how exciting it is to bring this album to the JUNO’s stage and be a part of it. “You kind of have to take it one day at a time, especially when you’re putting out a record, but you hope that after nine months you can turn around and go oh look, we did a bunch of stuff from the record and now we get to play the JUNO Awards. You cross your fingers that that’s the way it goes and it doesn’t always go that way, but we’re really happy and fortunate that it went that way for us this time.” 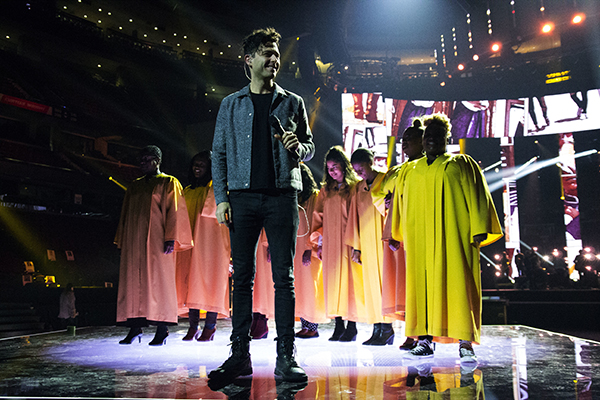 Max Kerman of the Arkells during rehearsal.

The JUNO Awards is held in a different location every year and has hit most of Canada in it’s time, and that’s what John Brunton (CEO, Insight Production, Executive Producer) said . This year was special for a few reasons, celebrating Canada’s 150th being the most apparent one. When asked if there was anything special coming out in the production, because it’s in Ottawa for the 150th, Alex Nadon (Production Designer – Lighting, Video Designer, and Director of Photography) said “this is my 10th JUNO’s actually, so it’s an important one for me, but when it comes to Ottawa and the 150th, I think there’s no better marriage. It’s so nice to be home in the capital for the 150th, it just feels so natural.”

Friday night it was Rock Vs. Jock at the TD Place in Ottawa, when players hit the ice for the JUNO Cup in support of MusiCounts, Canada’s music education charity. This is a special night for everyone involved, and did it ever show. Usually when you go to a hockey game, it’s so competitive that the players are all high strung, and it’s very rare to see them smile, but there wasn’t a face without a smirk all night. The game finished with a whopping score of 13-12 for the Jock’s, but let’s be honest, the score was never what mattered. In between periods there were skill games, a shootout that went to tie breaker, and an absolutely priceless sing-off between Daniel Alfredsson and Jim Cuddy. That sing-off was definitely a big highlight of the night, and it all wrapped up with the players in the middle of the ice, watching the highlight reel. 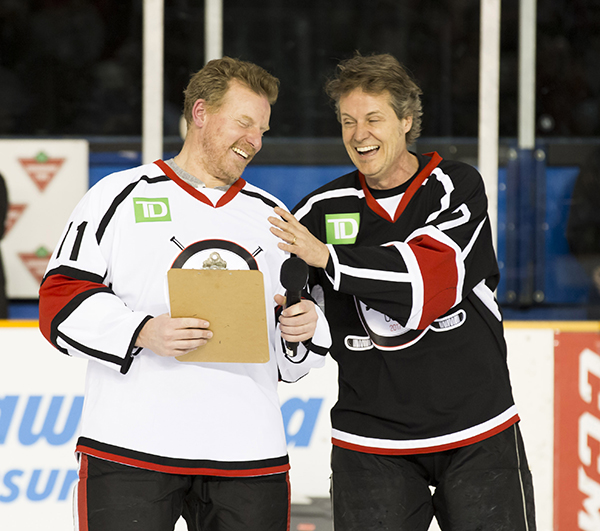 Last, but definitely not least leading up to the Gala and Awards, came JUNOfest. After the game, House of Targ was just a short walk down Bank Street, where we caught the Dirty Nil (Breakthrough Group of the Year winner), and Dilly Dally (Alternative Album of the Year nominee). While the bands are similar in sound, the guys from Dirty Nil really know how to get the crowd going and put on an absolutely phenomenal show. Now that’s not to say that Dilly Dally didn’t as well, because I could honestly say that it was as if we had gone back in time and were watching Hole play, but the vocalist outdid Courtney Love. 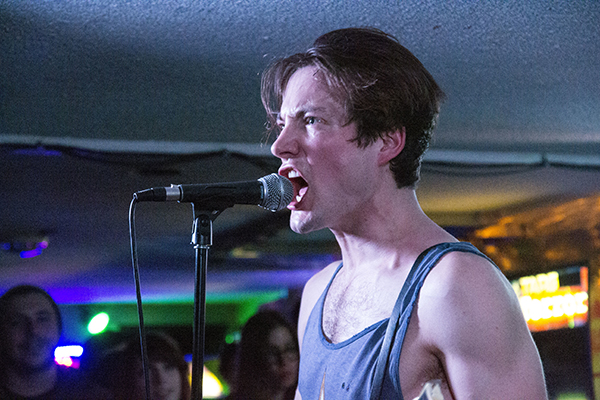 Dirty Nil at House of Targ 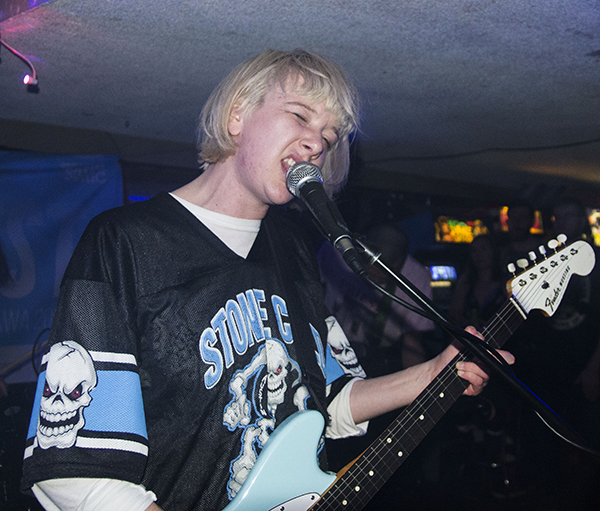 Dilly Dally at House of Targ

Saturday, after the JUNO Gala Dinner & Awards (review to be found separately) the market was the next stop. The Dominion tavern brought us Ornaments. The local Ottawa band is known for their electric live show, and they did not disappoint. There may only be three of them, but the sound is big enough to get the whole venue moving to the beat. Having them play JUNOfest made the decision of where to go that night quite easy and anyone who went definitely did not regret their choice. 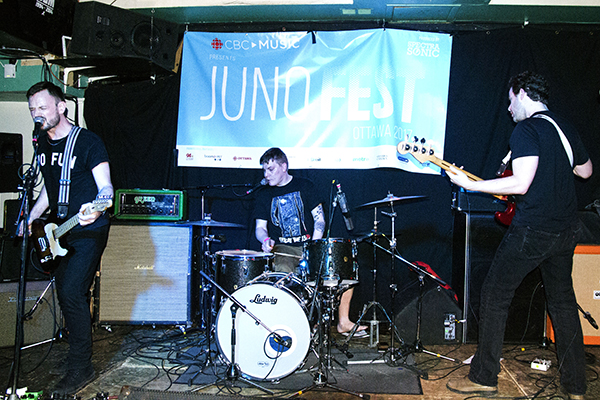 Racing over to Irene’s to catch William Prince’s set was a must after Ornaments finished theirs. Prince had a big day that day, but if you were in the crowd at Irene’s, you still felt like you were the only thing that mattered to him. He put on a very personal show almost directly after playing the In Memoriam tribute to musicians passed at the Gala, which is a much different environment, and also quite the honour. Comparable to a Johnny Cash voice, Prince’s baritone voice takes you away and you can feel it like you can feel the beat of a bass guitar in your chest, his vocals vibrate all the way through you and leave you with goosebumps. It’s no surprise that he took home Contemporary Roots Album of the Year for his solo album Earthly Days earlier in the evening. After the show, I sat down with Prince and had a conversation that will be found in the features section of our site. 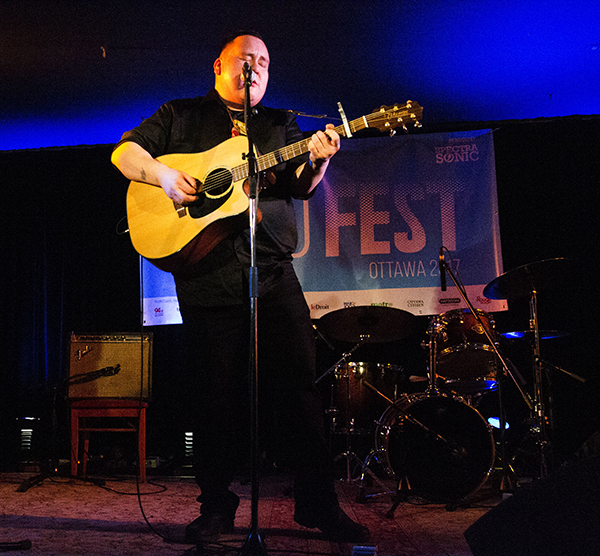 ARTIST OF THE YEAR (SPONSORED BY TD)
Leonard Cohen Sony

INSTRUMENTAL ALBUM OF THE YEAR Bird’s Nest The Fretless Independent

ELECTRONIC ALBUM OF THE YEAR (SPONSORED BY THE IBEW AND THE ELECTRICAL CONTRACTORS ASSOCIATION OF ONTARIO)
99.9% KAYTRANADA HW&W*Sony

Music makes the worst situations bearable and the best situations even better. I'm just here to share the inside scoop and anything you may have missed, while I establish my own voice in the industry. Born and raised in Ottawa, I never go anywhere without a set of headphones. Live music has been my vice for as long as I can remember and sharing stage side stories is a major bonus.
RELATED ARTICLES
blue rodeobryan adamsdilly dally