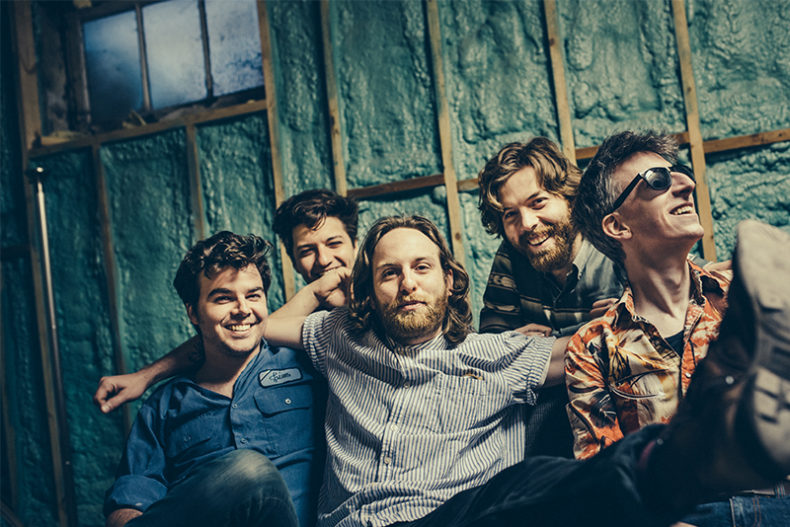 During a bluegrass show in the front lounge of the Tranzac, I once saw the grim reaper nonchalantly pass by the glass doors on his way to the main stage. Not as strange as it sounds. The venue hosts a mix of musical and dramatic performances. The array of talent, voices and experience is part of its charm.

On the night of Union Duke’s performance, with the twin theatre masks above their heads, the players’ stage was a mix of streamers and sequined cowboy shirts with “UNION DUKE” sprawled against string lights roped over wooden slats. A warning call went out to the crowd as the show commenced, “We’ve got two extra sets so budget your energy.”

It was a fair warning from the folk-rock quintet. Kicking off with “Heart Inside Of Me”, the set list went on to delivery a mix of songs from their new album, Golden Days (2016), along with tunes from their previous records, Cash & Carry (2014) and Bandits & Bridges (2013). They also performed a cover of “Ol’ 55”, which brought a slight softness to an audience that maintained a high-octane energy throughout the show.

The vocal swaps, combined with the band’s ability to navigate and jump from bluegrass banjo jams to indie-rock infused country is a testament to their skills as players and their musical intuition. They resonate emotionally as well, with travelling songs, tales of heartbreak, and even a nod to the country-goer’s mercy for the elements, there is no shortage of explored terrain. The lyrics in these songs take on the traditional roots lexicon with originality and down-home sensibilities.

Union Duke brings a host of talent to the table. With strong vocals and instrumental prowess, the delivery of this band makes their live performances well-worth checking out!

Elizabeth is a Toronto via Caledon writer whose rural upbringing left a lasting love of anything with a banjo and an upright bass. She scours Toronto venues for both the musical talent and the beers on tap.
RELATED ARTICLES
live reviewtorontotranzac club