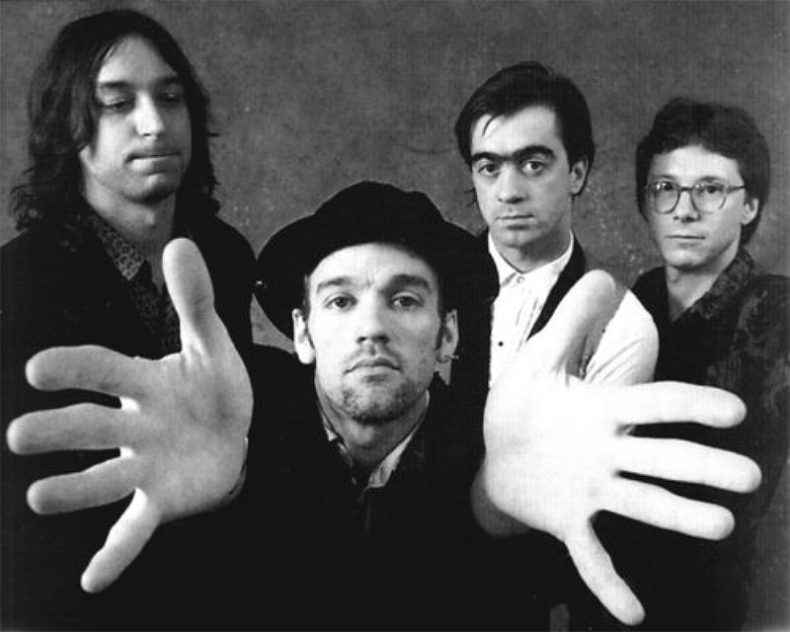 AUTOMATIC FOR THE PEOPLE: 25 YEARS LATER

When Michael Stipe walked into Wuxtry Records he had no idea what he was getting into. The shy, young music freak was there to pick up some vinyl to add to his hip, underground collection, but in doing so struck up a friendship with a guitarist who worked behind the counter of the record shop. His name was Peter Buck. The two found out they shared a similar taste in American punk rock artists like Patti Smith and Television, both obscure artists; especially in the South. The two became natural friends over their love of music and would soon decide to form a group.

After agreeing to form a band, Stipe and Buck met bassist Mike Mills and drummer Bill Berry, who both had played music since high school together and were now roommates at the University of Georgia. The foursome, desperate to find a name for their group, took to looking through the dictionary and chose “rapid-eye-movement” or R.E.M. for short. The name had no deep meaning to the band, it just sounded cool. Their first jam sessions took place in an old church that had been abandoned in their adopted town of Athens, Georgia.

R.E.M.’s music was a mosaic of post-punk, new wave and ‘60s folk-rock. Their pioneering sound soon became synonymous with the college rock music at the time and along with the B-52s, they soon became a major band in the Athens music scene. “None of us really had that much experience and I really think that was the greatest thing we had going for us,” said drummer Bill Berry. “We just had no idea what was going on.”

In the first few years after forming, R.E.M. became one of the hardest working bands of their era, playing anywhere from birthday parties to disco clubs to pizza parlours to get their name out there and work on their idiosyncratic sound. 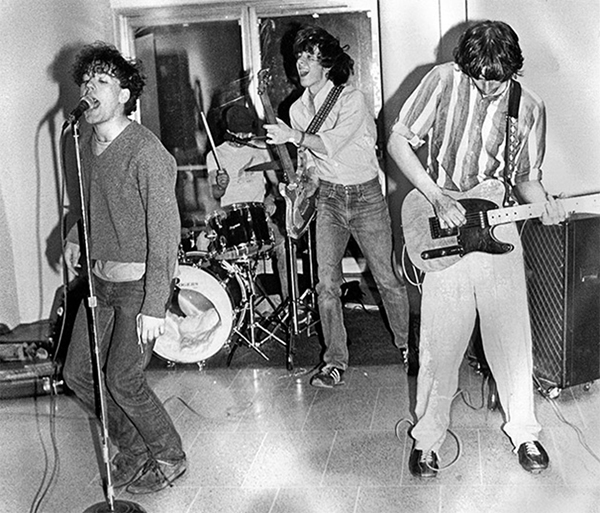 In 1981, a year after forming, R.E.M. recorded a demo tape which featured their first single, the post-punk influenced “Radio Free Europe”. The song was released on Hib-Tone, a small Atlanta label and soon peaked at number 78 on Billboard’s Hot 100, an impressive feat for a band on such a small label.

However, R.E.M. gained a reputation as the band with the singer you couldn’t understand. Stipe, especially on the bands early recordings, mumbled his way through the songs making him the Marlon Brando of the music world.

“What I was saying in the early days wasn’t a real lot,” reflected Stipe in the early ‘90s. “I was kind of just moaning and howling along with the music. Language to me and music really don’t mix well.”

“Radio Free Europe” soon attracted I.R.S, a record label featuring artists like the Buzzcocks and the Go-Go’s. Despite the labels weariness of the bands lead singer, they gave the group complete musical freedom to record, essentially, whatever they wanted. Within three months of signing with I.R.S. they had recorded an EP, Chronic Town, which featured reverb-drenched folk-rock akin to the Byrds.

R.E.M continued to work tenaciously and released their debut LP for I.R.S. in 1983. The album, Murmur, was voted album-of-the-year by Rolling Stone beating out Michael Jackson’s Thriller. Despite their critical success, the band remained relatively unknown and instead found an audience on college radio stations.

During the rest of the decade they recorded indie rock masterworks such as Reckoning, Life’s Richest Pageant and Document, paving the way for the alternative rock movement that would explode in the early ‘90s. Document was produced by Scott Litt who became a major influence on their sound for nearly 10 years and challenged them to go in a new musical direction. R.E.M. left behind their jangle pop for a more chaotic sound. Perhaps the most noticeable change in sound is the vocals. Stipe was now projecting his voice instead of mumbling so you could actually hear him. The album featured, “It’s the End of the World as We Know It”, a band staple and the vicious breakup song, “The One I Love” which ironically became the band’s first major hit. R.E.M. were on their way to becoming alt. rock superstars.

“It’s kind of exciting to talk about, we have a Top 10,” said Stipe in early 1988. “But you know, being on the cover of Rolling Stone wasn’t the pinnacle of my career or something that I’m proud of. It just happened.”

The success of Document attracted major label, Warner Bros. who soon offered the indie sensation a contract. The band signed nonchalantly and began working on their next LP, Green. The album furthered the bands success with more hits like “Orange Crush” and “Stand”, but would pale in comparison to the success of their next release.

After a long arena tour promoting Green they took a different approach to their next LP. Always willing to experiment, R.E.M. decided to switch up instruments during the writing process; having Buck play mandolin, Berry play bass, and Mills on organ and piano. The result was Out of Time, the album that launched them into superstardom. “Losing My Religion” and “Shiny Happy People” became radio staples and anthems of the burgeoning alternative rock movement they had helped to create. R.E.M. were finally a household name. Out of Time won three Grammy Awards and has sold a total of 18 million copies to date.

After wrapping up with the promotion of Out of Time, the band opted to skip a world tour which needless to say pissed off Warner Bros. However, R.E.M. was now free to write new material. The band, minus Stipe, began brainstorming in their rehearsal studio. They continued to swap instruments in hopes to find new, inventive musical ideas.

When it came time for R.E.M. to record demos they returned to their original instruments and recorded 30 tracks or so. Despite the band members going through personal issues they tried to focus on song-writing. However, the sound of their personal turmoil would be reflected in the songs laden on their next release. Stipe was sent the demo tape that had been recorded in Daniel Lanois’ haunted mansion recording studio to work with. The subjects of loss and death were evident early on in his lyrical approach.

From there, R.E.M. started recording what was to be the final polished product. Teaming up once again with producer Scott Litt, they started recording in Seattle, but opted to record around the country in cities as varied as Woodstock, New York City and Miami.

“This record was a nine-month metamorphosis,” said drummer Bill Berry. “It went from being a caterpillar to being a rat to being a dog to being a chicken. It just went all over the place. Midway through Miami we were all kind of looking at each other wondering what the heck this album was gonna sound like or how we were gonna finish it.” 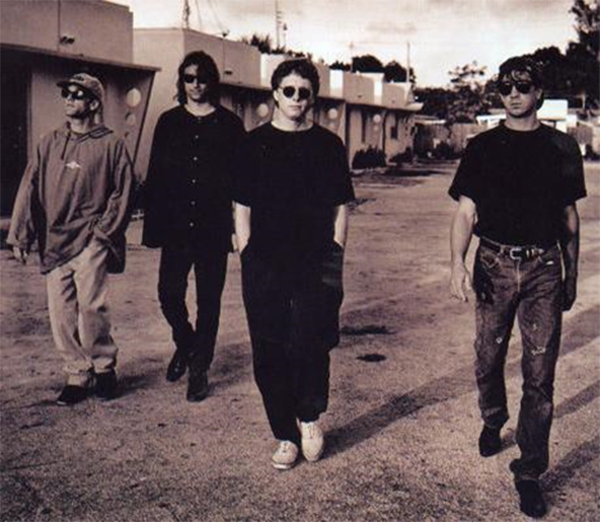 Before mixing took place the band hired ex-Led Zeppelin bassist, John Paul Jones, to arrange string instrumentations for the album. Strings were something the Athens foursome had flirted with in the past but never exploited as much as they had during the recording of Automatic. The lush orchestration Jones composed for the album helped to bring a swooning tenderness to tracks like “Drive” and “The Sidewinder Sleeps Tonite”

“We accomplished something that we set out to accomplish, unintentionally or otherwise in terms of making a record that was largely acoustic and using unorthodox instrumentation for a rock and roll band. And also, dealing with a subject matter that was almost unorthodox in rock and roll,” Stipe said following the release of Automatic for the People.

The conscious decision to have the murky “Drive” as the lead single was a bold statement from the band indeed. It didn’t radiate happiness that the jangly “Shiny Happy People” had nor did it have the instant pop appeal heard on “Losing My Religion”. “Drive” was subtler and required more patience for its sombre brilliance.

The theme of death on the record is quite apparent and in some ways very contradictory. In “Everybody Hurts”, Stipe urges the listener to hang on to their life, even if you’re thinking of letting go, while the twistedly-beautiful “Try Not to Breathe” seems to be rationalizing suicide or, at the very least, show the singer embracing dying in the moments before it happens. Death is further explored in “Man on the Moon”, the albums biggest hit, which pays homage to the deceased comedic genius Andy Kaufman.

Not only is death a dominate theme but the very fact of ageing plays a crucial part in the touching lyrics on the album. The milestone of turning 30 was, according to Peter Buck, an inspiration for the sombre themes heard on the album. “Nightswimming”, perhaps the most perfect song the band has ever crafted, is told through the eyes of someone driving and reflecting on their younger, more innocent years that are represented in a photograph set on their dashboard. “These things they go away/replaced by everyday,” sings Stipe on how life catches up with you and how your daily, mundane activities can make you forget the idealism of your youthful past. Mills’ spine-tingling piano lines and Stipe’s reverberating vocals, combined with Jones’ lush orchestration, are as striking as anything ever crafted in pop music. Turning 30 is a major turning point in anyone’s life and that resonates very much so on “Nightswimming”. 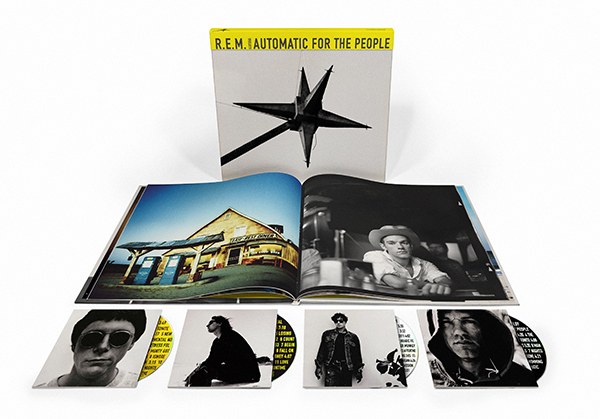 Released on October 5, 1992 during the height of grungemania, Automatic for the People stood out with its mature lyrics and sombre overall instrumentation. It was alt. rock for adults. While not as commercially successful as its predecessor, Automatic for the People peaked at number two on the Billboard Top 200 and was nominated for several Grammy’s including Album of the Year in 1993. Rolling Stone ranked the album at 18 of their pick of the 100 Greatest Albums of the 90s and at 247 on their list of 500 Greatest Albums of All-Time.

In March 1995, Bill Berry suffered a brain aneurysm during a performance in Switzerland. He underwent surgery and recovered within a month in time to finish the tour. However, after the traumatic life incident he quit the band two years later. After Berry left, R.E.M. lost a major part in their creative force and were never able to fully recover.

They continued to record well into the 21st century but after a number of lukewarm album responses since Berry’s departure, the band called it quits in the fall of 2011.

Automatic for the People stands as R.E.M.’s crowning achievement and was the last truly perfect album the band released. Despite making noteworthy efforts with Monster and Adventures in Hi-Fi, the band never again made an album with as much impact as their 1992 classic. Automatic for the People  is an ode to one’s own mortality but most importantly it makes you analyse your own life, the good and the bad. And hopefully after much reflection, this allows you to move forward celebrating the rest of your existence.

As a child growing up in the suburbs, Ryan found music as a way to soothe his boredom. After first hearing AC/DC at the age of 10, he was hooked on music. Tracing its roots to the ‘50s, he became obsessed with Elvis, Buddy Holly and Chuck Berry. Somehow that led to grunge, then psych-rock, then jazz, etc. The list goes on and on and his collection of vinyl records continues to grow.
RELATED ARTICLES
automatic for the peoplecraft recordingsfeatures