SPILL BOOKS: SCOTT WEILAND – NOT DEAD & NOT FOR SALE: A MEMOIR 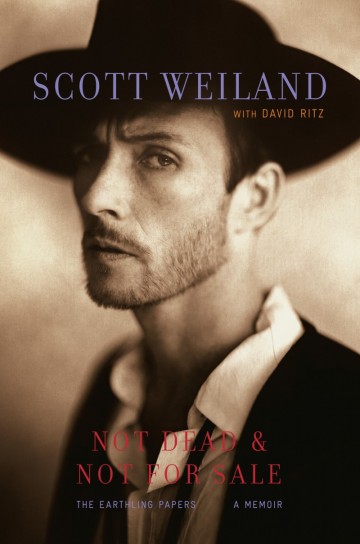 Scott Weiland – Not Dead & Not For Sale: A Memoir

Today’s Spill Book Club post is brought to you with great sadness.  Last night, Scott Weiland passed away in his sleep, on his tour bus, after having played his finale performance here in Toronto on Tuesday, December 1.  The music world mourns your loss, Mr Weiland.  Rest in peace.

In the early 1990s, Stone Temple Pilots—not U2, not Nirvana, not Pearl Jam—was the hottest band in the world. STP toppled such megabands as Aerosmith and Guns N’ Roses on MTV and the Billboard charts. Lead singer Scott Weiland became an iconic front man in the tradition of Mick Jagger, David Bowie, and Robert Plant. Then, when STP imploded, it was Weiland who emerged as the emblem of rock star excess, with his well-publicized drug busts and trips to rehab.

Weiland has since made a series of stunning comebacks, fronting the supergroup Velvet Revolver, releasing solo work, and reuniting with Stone Temple Pilots. He has prevailed as a loving, dedicated father, as well as a business-savvy artist whose well of creativity is far from empty. Not Dead & Not for Sale is a hard rock memoir to be reckoned with—a passionate, insightful, and at times humorous book that reads with extraordinary narrative force.

The Spill Magazine is a Toronto-based online publication dedicated to covering the independent music scene with a strong focus on our thriving hometown talent. Our writers bring you up-to-date news, in-depth features on musicians and reviews for the latest CD releases. We also travel to the front lines for all local festivals including Canadian Music Week and North by Northeast. Don’t forget to check out our Facebook and Twitter pages for all daily Spill updates.
RELATED ARTICLES
booksscott weilandstone temple pilots