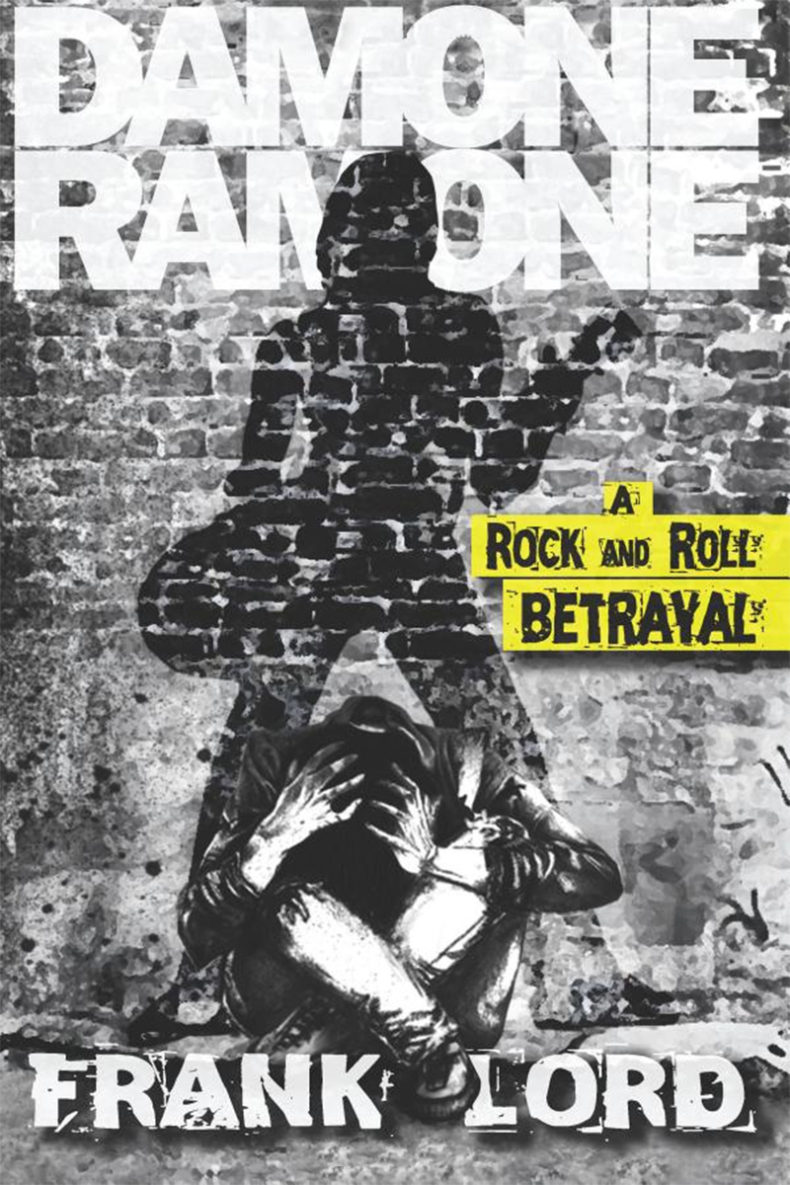 Frank Lord has written a book about The Ramones.  However, it is not a biography.  This is not an an “unofficial” biography”, but rather this is a fictionalized account of The Ramones. Fictionalized biographies are nothing new.  There are the biographies that are fiction, that try to come off as “official’, and then there are books like Damone Ramone: A Rock and Roll Betrayal.  Stephen King has often spoken of the ‘what if, and how that question leads to a novel’.  In this case, the ‘what if’ is what if the Ramones were real brothers and their real names were Ramone. Their public ‘real’ names (i.e. Joey Ramone’s real name is Jeffrey Ross Hyman as one example) are the fictional names.

The book is written in first person, as a memoir by Damone Ramone, the genius behind the band. He is the unknown Ramone, the one who stayed out of the spotlight but was responsible for their sound and songs on their first four albums.   The book is written almost with a punk sensibility.  Lord does an excellent job in creating a grimy, dirty underworld of New York City (actually one of their boroughs).

The problem with this book is that it is not well written.  I know this sounds harsh, but Lord does not create multi dimensional characters, and although sort of base on real people, the characters lack the depth that the material could have produced.  Let’s face it, The Ramones were, at times, almost cartoon characters themselves, and their own internal battles would make for more interesting reading.  It would certainly be funnier.

That is the other problem with the book.  Lord tries to be funny and at times he succeeds.  There are legitimately funny portions throughout the book.  These parts, though, are few and far between.  In 1978, Mark Shipper wrote a remarkably funny book, Paperback Writer,  about the Beatles reuniting and their failure after regrouping.  He also created a false history of the band, which set up the reunion beautifully.  Each page had a laugh and the humour was well thought out.  Lord does not set situations up throughout the book.  The history of the famous count-in heard when The Ramones performed live before each song is humorous and interesting.  However, he seems to base a great deal of material on one joke, which gets tired very quickly.  Further to that point, I never want to read about masturbation again.  It is funny for a while, but the joke wears thin.

Damone Ramone: A Rock and Roll Betrayal, could have been a brilliant read, especially if it had been much shorter.  A novella, for instance, would have met the needs of this book.  At 499 pages, it is a bit tough going and again, because the characters are not fully developed, it gets a bit thin plot wise.

Lord has an excellent idea, and he at parts of the book, he is able to demonstrate he has talent.  Sadly, the excellent idea did not reach potential and the result is a book that instead of “what if” became “could have been”.

Purchase Damone Ramone: A Rock And Roll Betrayal Via

Born and raised in Whitby, Aaron discovered music through his love of The Beatles. This led to a career in radio, writing for various publications, and ultimately a radio show about The Beatles (Beatles Universe), which ran for over four years. When not immersed in music, Aaron enjoys spending time with the loves of his life -- his wife Andrea, and daughters Emily and Linda (all of whom have an intense love of music too).
RELATED ARTICLES
booksthe ramones