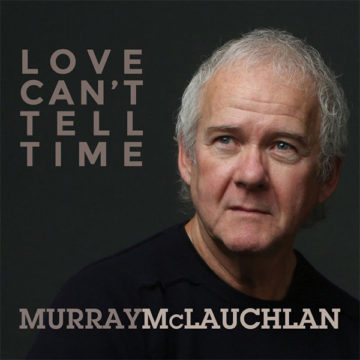 No one could ever accuse Murray McLauchlan of doing the expected.  He takes his time between records, has been part of a success ‘supergroup’ (Lunch at Allen’s) and does pretty much what he wants.  This is justified, as McLauchlan is a legend.  He has written some of the most iconic songs of the past 50 years (“The Farmer’s Song”, “Hard Rock Town”, “On The Boulevard”).  So, he has earned this right.

Here we are with his 19th studio album, Love Can’t Tell Time.  Great album title and an interesting album.  First of all, it was recorded live off the floor, with McLauchlan taking lead vocals, and playing a 1938 Hensell guitar.  Victor Bateman provides some very tasteful stand up bass, and according to McLauchlan, he sang into an old tube microphone.  You know what this leads up to, right.  This album is a throwback to a simpler time, and like Dylan on his most recent releases, McLauchlan tackles some familiar standards, such as “Pick Yourself Up” (made famous by Fred Astaire), “Hey There” (Rosemary Clooney) and “Come Fly WIth Me” (Sinatra).  McLauchlan won’t make you forget the originals, but he does a great job, especially “Come Fly WIth Me”, which features a terrific string arrangement from Drew Jureka.  I can’t remember when his voice sounded so good.  He loves these songs, and that love for the past, the arrangement, and the song comes through, loud and clear.

The album is a mix of covers and songs he co-wrote.  The  co-written songs stand up fine with the covers.  This is not his typical folk, folk-rock or country style, he writes in a similar style as the old songs.  ‘Cliches become cliches because they’re true’, sings McLauchlan in “The Second Half of Life”.  From there the song goes on with McLauchlan trying to convince the listener that growing old is wonderful “You grow older you grow wiser” he almost sneers.  This song is pure tongue in cheek and great fun.  But that is the point of this album, growing old.

McLauchlan has never shied away from expressing himself, and here he lets us all know that growing old is not fun, not depressing, but not fun either.  ‘You’re easier to hit, when you’re at the top’ he states at the end of the album from the song “When You’re At The Top”, cynical, maybe, but it goes hand in hand with aging, and not delivering what the young crowd wants.  He is not bitter, just giving some very good advice to the new stars.

A couple of weeks ago I bought a 1916 gramophone.  Not only do I think McLauchlan would approve (he probably has one) but would love to hear what I had to play on it, and I would like to play some of his new album on it.  It is a great album and one that will stand the test of time.

It has been six years since his last album 2011’s Human Writes, and I am glad he is back.  Not to keep comparing him to Dylan, but I wish he would release records at the same pace.

Born and raised in Whitby, Aaron discovered music through his love of The Beatles. This led to a career in radio, writing for various publications, and ultimately a radio show about The Beatles (Beatles Universe), which ran for over four years. When not immersed in music, Aaron enjoys spending time with the loves of his life -- his wife Andrea, and daughters Emily and Linda (all of whom have an intense love of music too).
RELATED ARTICLES
album reviewslove can't tell timemurray mclauchlan
8.0