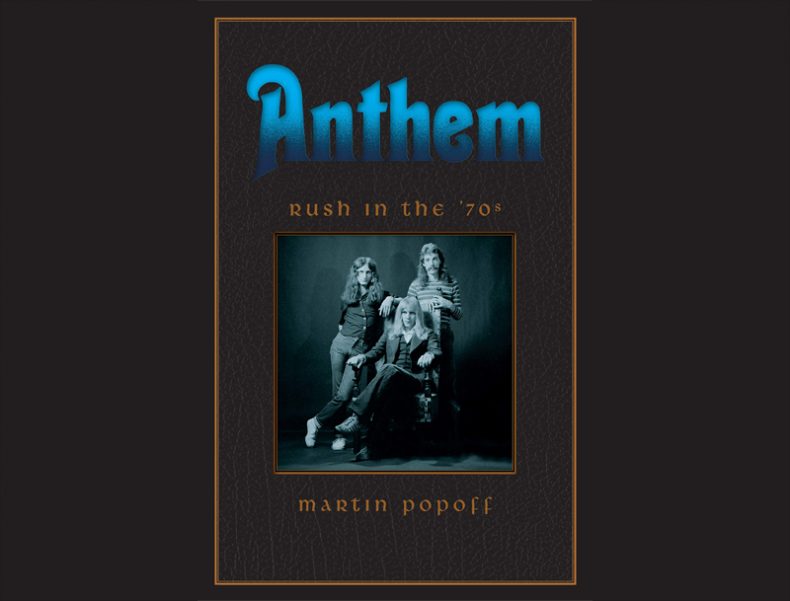 Moving away from the coffee table style, album-by-album artists examinations he’s published in the last few years, Martin Popoff has moved his attention into digging deep into Rush with an extensive trilogy of biographies on the Canadian progressive rock pioneers. The first in this trilogy, Anthem: Rush In The ‘70s, focuses on the early years of bassist and vocalist Geddy Lee, guitarist Alex Lifeson, and late drummer Neil Peart. It also shares insights into the formation of the band, the making and reception of Rush, Fly By Night, Caress Of Steel, 2112, All The World’s A Stage, A Farewell To Kings, and Hemispheres, and their associated tours throughout the 1970s. In traditional Popoff fashion, Anthem is driven by a combination of extensive interviews and his own analysis to make a truly in-depth exploration of Rush.

The book will immediately catch your eye with its faux leather finish with gold text. Fashioned like a bible, Anthem is a truly stunning book. Such attention to the visual gives a certain definitive quality to Popoff’s work, even before opening it. This is the Rush biography that you need. Anyone familiar with any of his previous work, Anthem, is certainly in that league. Following a collection of interviews with the members of Rush, their family members, musicians they’ve shared the stage with, and managers and other industry figures from the time,  Anthem slowly works its way through the ‘70s with a focus on the development of Rush from the preferred choice in entertainment at your North York high school dance to progressive rock icons. The interviews were conducted by Popoff, Sam Dunn, and Scot McFadyen of Banger Films, for their award-winning documentary, Rush: Beyond The Lighted Stage.

Although very thorough, Anthem gets off to a slow start as Lee and Lifeson’s childhood and introductions to music are told in the first chapter. Popoff spares no detail in his attempt to cover all his bases. This however, proves to be one of his greatest strengths when moving forward into chapters which focus on the making of, tours for, and the general reception to each album from the decade. Reading firsthand accounts about the creative process behind classic albums like Fly By Night, 2112, and A Farewell To Kings is truly incredible and separates Anthem from the countless other Rush biographies you’ll find.

As only part one of Popoff’s trilogy, Anthem dives head first into all things Rush. There is something here for everyone. A more casual fan, such as myself, will learn a lot. Think of Anthem as your first year in your three-year bachelor’s degree in Rush, and Popoff is your professor. However, even lifelong Rush fans are bound to read plenty that they were unaware of.

Whether you’re looking for some nostalgia in the aftermath of Peart’s passing or are looking to expand your knowledge on one of the greatest prog rock innovators, Anthem: Rush In The ‘70s will make for a strong addition to your bookshelf. Ultimately, Anthem marks an incredibly strong and insightful first entry that will leave you very much excited for parts two and three to Popoff’s latest saga.

Purchase Anthem: Rush In The ’70s Via