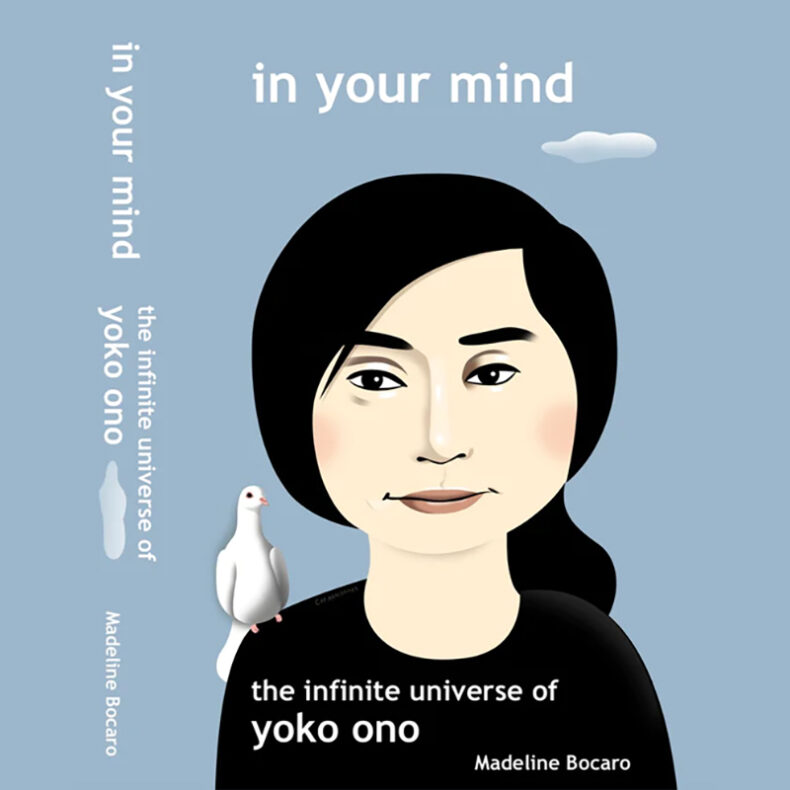 MADELINE BOCARO – IN YOUR MIND: THE INFINITE UNIVERSE OF YOKO ONO

Yoko Ono is one of  the most misunderstood artists of all time. She is a genius both musically and visually. Sadly, far too many people have painted a very inaccurate and mean version of her and as a result for years she has been subject to verbal and written abuse. However, she is now getting the recognition she so rightfully deserves. From her work as a Fluxus artist to her music to her films with (and without) John Lennon, her talent and genius is being acknowledged. Many books have been written about Ono, but The Infinite Universe Of Yoko Ono by Madeline Bocaro is a very different text. Not only is she a fan of Ono, she is a friend. This gives her, and us readers, an insight into Ono and her brilliant work.

Bocaro is a brilliant writer and has written about and for many artists over the years, but it is her relationship with Ono that is highlighted in this book. Her knowledge of Ono is second to none and because she has the inside story, there is a great deal of information about the music and art that has not been known. Her use of Ono’s quotations illustrate her points throughout the book. Although The Infinite Universe Of Yoko Ono is not a standard, chronological biography, she does establish Ono’s personal history. But this is not the focus, but it is important to know about her own personal experiences and how this informed and influenced her work.

Bocaro notes, in her introduction, that “this is a love letter to Yoko” but that does not do the book justice. Through her own research and friendship with Ono, Bocaro has written the bible on Ono. The quotations she uses from Ono are well-documented and read like poetry. Ono’s statements read beautifully and Bocaro ties everything together while leaving space for the reader to bring in their own interpretation, like Ono’s work.

Although this is a book about Ono, John Lennon features throughout and Bocaro uses his comments on Ono effectively but also stories about Lennon meeting her family for the first time are fascinating. Stories, such as these, are not well documented in Beatle literature and to read about it here is enlightening. One can also see the influence her art had on Lennon and her support of Lennon to experiment on his own. Throughout the book Bocaro demonstrates Ono’s influence on artists and musicians. Again, it makes for fascinating reading.

The Infinite Universe Of Yoko Ono is a brilliant book and the perfect companion to Ono’s art. Bocaro has explored Ono as an artist but as a human. Ono has always incorporated her own sense of self into her art and she has always been very open and honest with her art. This book peels back a few more layers and provides information that helps in the understanding of this incredible artist.

Purchase In Your Mind: The Infinite Universe Of Yoko Ono Via

Born and raised in Whitby, Aaron discovered music through his love of The Beatles. This led to a career in radio, writing for various publications, and ultimately a radio show about The Beatles (Beatles Universe), which ran for over four years. When not immersed in music, Aaron enjoys spending time with the loves of his life -- his wife Andrea, and daughters Emily and Linda (all of whom have an intense love of music too).
RELATED ARTICLES
booksplastic ono bandyoko ono