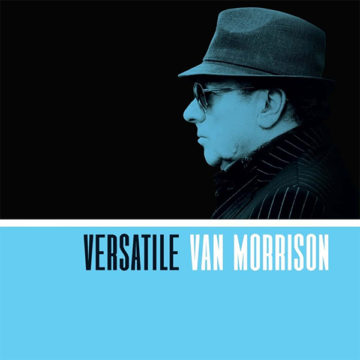 Versatile is Van Morrison’s 38th studio album, and his second album this year. In September Roll With The Punches was released, and now in December Morrison has yet another release. Who would have thought that Morrison would be this prolific? He has pretty much released an album a year, but from what I can see, this is the first time he has issued two albums within one year.

As with Roll With The Punches, the majority of this album features cover versions, but that is where the similarity ends. Whereas Roll With The Punches had more of a rhythm and blues feel, Versatile is basically songs from ‘The Great American Songbook’, along with six songs written by Morrison performed and arranged in that style.

For the most part this album works. Morrison himself produced Versatile, and he taps into the nostalgic sound of the origins of these songs. He knows this music and he obviously loves it. He performs straight covers of the songs, and although it is Morrison sounding like Morrison, he adheres to the original sound and arrangement of each song. And he sounds like he is having the time of his life singing these classic songs.

The album kicks off with a brand-new song from Morrison, “Broken Record”. “When things are driving me insane, Let me hear that same old rhythm ring” Morrison sings in the opening song, setting the stage.

He then bookends the album with two songs from the Gershwins: “A Foggy Day” and “They Can’t Take That Away From Me”.  “A foggy day in London Town, Had me low and had me down” he sings in “A Foggy Day”, with a beautiful accompaniment. But as the song resolves itself into sunshine, Morrison moves into optimistic songs from another era. “Bye Bye Blackbird”, “Makin’ Whoopee”, and “I Get A Kick Out of You” sound fresh, and Morrison brings a great deal of warmth to these gems. Ending the album with “They Can’t Take That Away From Me” sums up the album: “The way you changed my life, no they can’t take that away from me”, which is not necessarily sung to a person, but perhaps to music itself. This album is a celebration of an era long gone by, but still relevant in today’s world.

Morrison reinterprets some of his older songs in a big band style on this album. “I Forgot That Love Existed” (from Poetic Champions Compose, 1987), “Start All Over Again” (from Enlightenment, 1990), and “Only A Dream” (from Down The Road, 2002) fit perfectly along with the other new songs he has written for this collection. He has arranged the songs so they have the same feel and vibe as the more classic songs.

Morrison is 72, and he sounds great. He is reliving music from both his youth and his last release on this album, and there is nothing wrong with that. This album works a bit better than his last release, as it is somewhat different for him. Yes, he has done similar arrangements in the past, but Versatile has a different feel and perhaps a different meaning than his previous albums. If Morrison can continue to release such unpredictable records, he is maintaining his stature as a legend. A great album by a great artist.

Here's what we think...
Spill Rating
Fan Rating
Rate Here
New Criteria
10
8.6
7.0
Total Spill Rating
8.6
Total Fan Rating
3 ratings
You have rated this
Album Reviews
album reviewsbroken recordi get a kick out of youlegacy recordingsroll with the punchessony musicvan morrisonversatile
album reviews, broken record, i get a kick out of you, legacy recordings, roll with the punches, sony music, van morrison, versatile
About the Author
Aaron Badgley

Born and raised in Whitby, Aaron discovered music through his love of The Beatles. This led to a career in radio, writing for various publications, and ultimately a radio show about The Beatles (Beatles Universe), which ran for over four years. When not immersed in music, Aaron enjoys spending time with the loves of his life -- his wife Andrea, and daughters Emily and Linda (all of whom have an intense love of music too).
RELATED ARTICLES
album reviewsbroken recordi get a kick out of you
9.0