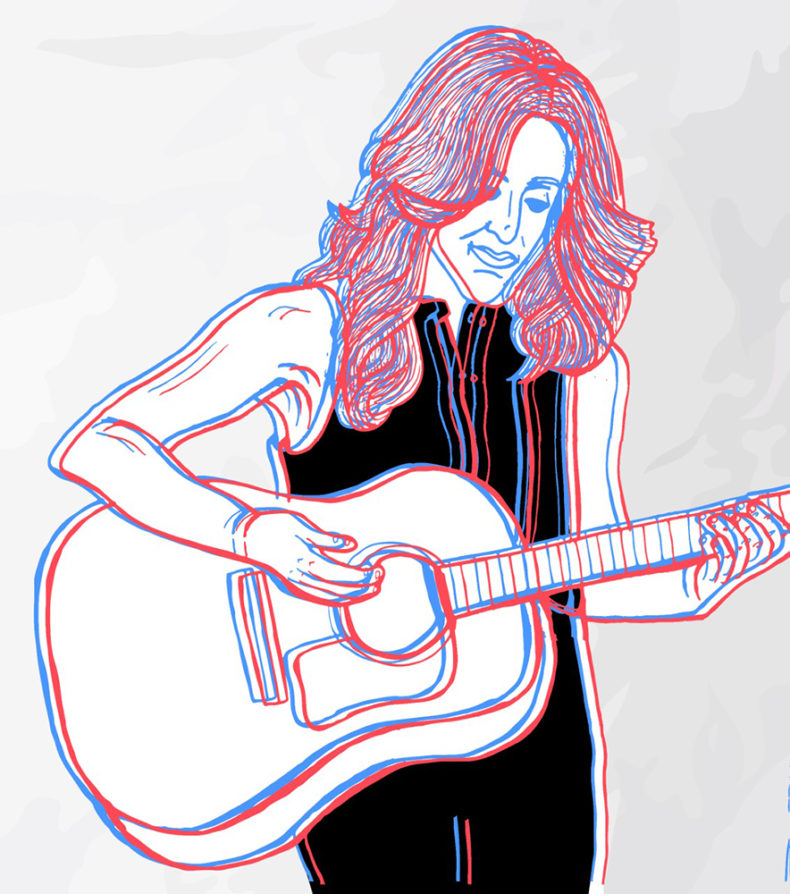 Sheryl Crow’s fresh, updated spin on classic roots rock made her one of the most popular mainstream rockers of the ’90s. Her albums were loose and eclectic on the surface, yet were generally tied together by polished, professional song-craft. Crow’s sunny, good-time rockers and world-weary ballads were radio staples for much of the ’90s, and she was a perennial favorite at Grammy time. Although her songwriting style was firmly anchored to the rock tradition, she wasn’t a slave to it — her free-associative, reference-laden poetry could hardly have been the product of any era but the ’90s. Her production not only kept pace with contemporary trends, but sometimes even pushed the envelope of what sounds could be heard on a classicist rock album, especially on her self-titled sophomore effort. All of this made Crow one of the most dependable stars of the decade, and she showed no signs of relinquishing her hard-won success in the new millennium.

BadSheryl Suzanne Crow was born February 11, 1962, in Kennett, Missouri. Her parents had both performed in swing orchestras, her father on trumpet and her mother as a singer; her mother was also a piano teacher, and ensured that all her daughters learned the instrument starting in grade school. Crow wrote her first song at age 13, and majored in music at the University of Missouri, where she also played keyboards in a cover band called Cashmere. After graduating, she spent a couple of years in St. Louis working as a music teacher for autistic children. She sang with another cover band, P.M., by night, and also recorded local advertising jingles on the side. In 1986, Crow packed up and moved to Los Angeles to try her luck in the music business. She was able to land some more jingle-singing assignments, and got her first big break when she successfully auditioned to be a backup singer on Michael Jackson’s international Bad tour. In concert, she often sang the female duet part on “I Just Can’t Stop Loving You,” and was inaccurately rumored by the tabloids to have been Jackson’s lover. After spending two years on the road with Jackson, Crow resumed her search for a record deal, but found that record companies were only interested in making her a dance-pop singer, which was not at all to her taste.

The End of the Innocence Frustrated, Crow suffered a bout of severe depression that lasted about six months. She revived her career as a session vocalist, however, and performed with the likes of Sting, Rod Stewart, Stevie Wonder, Foreigner, Joe Cocker, Sinéad O’Connor, and Don Henley, the latter of whom she toured with behind The End of the Innocence. She also developed her songwriting skills enough to have her compositions recorded by the likes of Wynonna Judd, Céline Dion, and Eric Clapton. Thanks to her session work, she made a connection with producer Hugh Padgham, who got her signed to A&M. Padgham and Crow went into the studio in 1991 to record her debut album, but Padgham’s pop leanings resulted in a slick, ballad-laden record that didn’t reflect the sound Crow wanted. The album was shelved, and fearing that she’d let her best opportunity slip through her fingers, Crow sank into another near-crippling depression that lingered for nearly a year and a half. However, thanks to boyfriend Kevin Gilbert, an engineer who’d attempted to remix her ill-fated album, Crow fell in with a loose group of industry pros that included Gilbert, Bill Bottrell, David Baerwald, David Ricketts, Brian MacLeod, and Dan Schwartz. Dubbed the Tuesday Night Music Club, this collective met once a week at Bottrell’s Pasadena recording studio to drink, jam, and work out material. In this informal, collaborative setting, Crow was able to get her creative juices flowing again, and the group agreed to make its newest member — the only one with a recording contract — the focal point.

Tuesday Night Music ClubCrow and the collective worked out enough material for an album, and with Bottrell serving as producer, she recorded her new official debut, titled Tuesday Night Music Club in tribute. The record was released in August 1993 and proved slow to take off. Lead single “Run Baby Run” made little impact, and while “Leaving Las Vegas” attracted some attention, it reached only the lower half of the charts. A&M took one last shot by releasing “All I Wanna Do,” a song partly written by poet Wyn Cooper, as a single. With its breezy, carefree outlook, “All I Wanna Do” became one of the biggest summer singles of 1994, falling just one position short of number one. Suddenly, Tuesday Night Music Club started flying out of stores, and spawned a Top Five follow-up hit in “Strong Enough” (plus another minor single in “Can’t Cry Anymore”). Crow was a big winner at the Grammys in early 1995, taking home honors for Best New Artist, Best Female Rock Vocal, and Record of the Year (the latter two for “All I Wanna Do”). Her surprising sweep pushed Tuesday Night Music Club into the realm of genuine blockbuster, as its sales swept past the seven million mark. After close to a decade of dues-paying, Crow was a star.

Unfortunately, success came at a price. In 1994, Crow had been invited to perform “Leaving Las Vegas” on Late Night with David Letterman. In a brief interview segment, Letterman asked if the song was autobiographical, and Crow offhandedly agreed that it was. In actuality, the song was mostly written by David Baerwald, based on the book by his good friend John O’Brien (which had also inspired the film). Having been burned by the industry already, some of the Tuesday Night Music Club took Crow’s comment as a refusal to give proper credit for their contributions. Baerwald in particular felt betrayed, and things only got worse when O’Brien committed suicide not long after Crow’s Letterman appearance. Although O’Brien’s family stepped forward to affirm that Crow had nothing to do with the tragedy, the rift with Baerwald was already irreparable. Some Club members bitterly charged that Crow’s role in the collaborative process was rather small, and that the talent on display actually had little to do with her. Tragedy struck again in 1996 when Crow’s ex-boyfriend, Kevin Gilbert, was found dead of auto-erotic asphyxiation.

Sheryl Crow Stung by the accusations, Crow set out to prove her legitimacy with her second album when the heavy touring for Tuesday Night Music Club finally ended. Bill Bottrell was originally slated to produce the record, but fell out with Crow very early on, and the singer ended up taking over production duties herself. However, she did bring in the noted team of Mitchell Froom and Tchad Blake as assistant producer and engineer, respectively. Froom and Blake were known for the strange sonic experimentation they brought to projects by roots rockers (the Latin Playboys) and singer/songwriters (Richard Thompson, Suzanne Vega), and they helped Crow craft a similarly non-traditional record. Released in the fall of 1996, Sheryl Crow definitely bore the stamp of the singer’s personality and songwriting voice, especially in the idiosyncratic lyrics; plus, she was now doing most of the writing, usually with her guitarist, Jeff Trott, proving that she could cut it without her estranged collaborators. The singles “If It Makes You Happy,” “Everyday Is a Winding Road,” and “A Change Would Do You Good” were all radio smashes, and “Home” also became a minor hit. Sheryl Crow went triple platinum, and Crow brought home Grammys for Best Rock Album and another Best Female Rock Vocal (for “If It Makes You Happy”).

Tomorrow Never Dies [Original Soundtrack]Crow toured with the Lilith Fair package during the summer of 1997 (the first of several tours), and subsequently wrote and performed the title theme to the James Bond film Tomorrow Never Dies. In the fall of 1998, she returned with her third album, The Globe Sessions. A more straightforward, traditionalist rock record than Sheryl Crow, The Globe Sessions didn’t dominate the airwaves in quite the same fashion, but it did become her third straight platinum-selling, Top Ten LP, and it won her another Grammy for Best Rock Album. It also spawned two mid-sized hits in the Top 20: “My Favorite Mistake” and “Anything But Down.” In 1999, she contributed a Grammy-winning cover of Guns N’ Roses’ “Sweet Child o’ Mine” to the soundtrack of the Adam Sandler comedy Big Daddy. She also performed a special free concert in New York’s Central Park, with an array of guest stars including Keith Richards, Eric Clapton, Chrissie Hynde, the Dixie Chicks, Stevie Nicks, and Sarah McLachlan. The show was broadcast on Fox and later released as the album Live in Central Park, just in time for the holidays. “There Goes the Neighborhood” won her another Grammy for Best Female Rock Vocal; however, partly because of some shaky performances, the album flopped badly, not even going gold.

Trouble in Shangri-La Hit with a case of writer’s block, Crow took some time to deliver her fourth studio LP. In the meantime, she produced several tracks on Stevie Nicks’ 2001 album, Trouble in Shangri-La, and also recorded a duet with Kid Rock, “Picture,” for his album Cocky. Finally, in the spring of 2002, Crow released C’mon C’mon, which entered the LP charts at number two for her highest positioning yet. It quickly went platinum, and the lead single, “Soak Up the Sun,” was a Top 20 hit and another ubiquitous radio smash. The follow-up, “Steve McQueen,” was also a lesser hit. At the beginning of 2005 it was announced that there would be two simultaneously released new albums available by the end of the year. The project was then scaled back to the single-disc Wildflower, which saw release at the end of September. Crow was forced to take time off from her musical career in 2006 after being diagnosed with stage 1 breast cancer. After successful treatment, she returned in 2008 with her sixth studio album, Detours. The soul-inspired 100 Miles from Memphis followed in 2010 and featured guest spots from Keith Richards, Justin Timberlake, and Citizen Cope. By the end of that year she had performed with Loretta Lynn and Miranda Lambert on the title track of a Lynn tribute album, Coal Miner’s Daughter. This country-focused collaboration was an early indicator of the direction that Crow’s work would eventually take in the years that followed.

Seeking Major Tom A creatively quiet 2011 ended with her appearance on William Shatner’s space-themed third studio album, Seeking Major Tom. Crow’s delicate, piano-fueled cover of K.I.A.’s “Mrs. Major Tom” was generally received by critics as one of the highlights of the disc. Then, in summer 2012, she revealed details of another health scare. Although Crow had been diagnosed with a brain tumor at the end of 2011, it was found to be benign, and six months on she was quoted in many news reports as feeling healthy and happy. That November she issued the download-only, politically charged “Woman in the White House.” It was her first self-penned material to appear in a couple of years and was her most out-and-out mainstream country track to date. March 2013 saw the release of “Easy,” the first single to appear ahead of Feels Like Home, a country-steeped full-length that appeared in September of 2013. Feels Like Home debuted at seven on the Billboard Top 200 — and number three on the country chart — but generated no country hits, so Crow changed direction for 2017’s Be Myself by reuniting with her ’90s collaborators Tchad Blake and Jeff Trott.

Daniel is an illustrator/graphic designer based out of Austin Texas. He graduated from Pratt Institute with a Bachelors degree in Illustration and an Associates degree in Graphic Design. Daniel started his career in graphic design in the world of online casinos. Since then he’s worked with various clients from around the United States and Canada including but not limited to NHL, Subway, Paraco Propane, Pitney Bowes, Xerox, Conduent, Nestle Waters, The Spill Magazine, Stamford CT’s DSSD, Beechnut Baby Foods, Elizabeth Arden and much more.
RELATED ARTICLES
be myselfdaniel adamsportraits
9.0