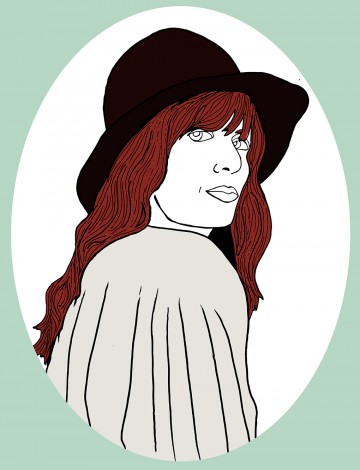 Hailing from South London, Florence Mary Leontine Welch writes songs that occupy the same confessional territory as gossip-loving, genre-bending contemporaries like Amy Winehouse, Kate Nash, Adele, and Lily Allen and the moody, classic art rock of Kate Bush, blending pop, soul, and Baroque arrangements into a sound that earned the young artist considerable buzz in 2007. Managed by the Camden-based DJ duo the Queens of Noize and backed by a rotating lineup of musicians, Florence + the Machine released their debut single, “Kiss with a Fist,” on the Moshi Moshi label in June 2008. The critically acclaimed debut album Lungs followed in July 2009 and quickly became one of the year’s most popular releases in the U.K., where Florence charted four Top 40 singles in less than 12 months. The songs gathered steam in other parts of the world, too, particularly in America, where “Dog Days Are Over” peaked at number 21, went platinum, and even earned its own performance on the TV show Glee. Lungs was reissued the following year in a two-disc package entitled Between Two Lungs, and included a bonus 12-track disc that featured live versions and remixes. That same year, Florence + the Machine returned to the studio with producer Paul Epworth (Bloc Party, Adele) to begin work on their second full-length outing. The resulting Ceremonials, which successfully expanded on the group’s already huge sound, arrived on Halloween in 2011. The following year saw the release of CD and DVD versions of MTV Unplugged, an 11-track set filmed before a small studio audience that featured fan favorites along with a pair of covers, including “Try a Little Tenderness” and the Johnny Cash/June Carter classic “Jackson,” the latter of which featured guest vocals by Queens of the Stone Age frontman Josh Homme. That same year, Welch announced an upcoming period of inactivity, citing a vocal injury and “a bit of a nervous breakdown” as the root causes. Her much-anticipated third studio long-player, the Markus Dravs-produced How Big, How Blue, How Beautiful, was announced in late 2014 and arrived in May 2015. It was the band’s third consecutive number one U.K. album, and their first to top the U.S. chart.

Daniel is an illustrator/graphic designer based out of Austin Texas. He graduated from Pratt Institute with a Bachelors degree in Illustration and an Associates degree in Graphic Design.Daniel started his career in graphic design in the world of online casinos. Since then he’s worked with various clients from around the United States and Canada including but not limited to NHL, Subway, Paraco Propane, Pitney Bowes, Xerox, Conduent, Nestle Waters, The Spill Magazine, Stamford CT’s DSSD, Beechnut Baby Foods, Elizabeth Arden and much more.
RELATED ARTICLES
daniel adamsflorence & the machineportraits