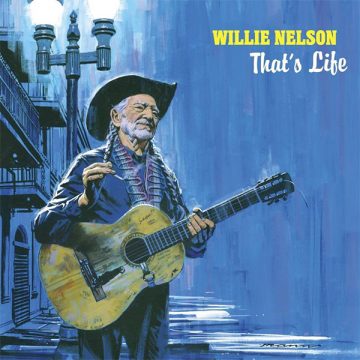 On his latest and 71st solo album, Willie Nelson has chosen to pay tribute to his friend Frank Sinatra. That’s Life is a collection of 11 Sinatra covers crooned by Nelson over a jazz ensemble – and is his second Sinatra covers album, following 2018’s My Way – making for a truly unique performance and yet another standout in Nelson’s massive catalogue.

From the very get go, That’s Life echoes out of the speakers with an air of sophistication, class, and taste. The opening track, “Nice Work If You Can Get It” kicks off with a piano run. Soft drums and bass enter before Nelson’s warm vocals come in, with a tone that is equally dignified and gentle, making it undeniably classic. The same very much can be said about the following “Just In Time” while “Cottage For Sale” delivers a stunning and cinematic sense of melancholy and raw emotion.

What makes That’s Life such a fantastic tribute is Nelson’s conviction to the music. His passion is felt abundantly as he does justice by these standards in a jazzy and vintage pop fashion. From the Latin pulse of “I’ve Got You Under My Skin” to the stunning duet with Diana Krall on “I Won’t Dance”, Nelson is incredible, so much so, that had you not heard his country or folk material, you’d think he was made for jazz. Furthermore, the bluesy “That’s Life”, accented by a muted harmonica, the lively big band flair of “Luck Be A Lady”, and the sauntering swing of “Lonesome Road” are additional highlights among a very strong album.

When taking into account his collaborative albums, Nelson has released more records than years he has lived. Despite that, however, That’s Life acts as a stylistic departure that only adds to his already iconic legacy and proves that, even after all this time, Nelson’s still got some creative juices left in the tank. Front to back, That’s Life is a thoroughly enjoyable album without a single weak link. Ultimately, Nelson has delivered an incredible tribute to Sinatra that will leave you wondering what a party hosted by the two would look like.

A passion for music has always been a part of Gerrod’s life. As a young boy, he was raised on a steady diet of the music from The Chili Peppers, Aerosmith, The Stones, Prince, and others from his mum. Raised in the GTA, Gerrod continued to foster his love for music by attending a wide range of concerts and learning the drums. His unapologetic passion for music has no bounds and has spread to a wide variety of styles, whether it be the 90’s rock that sound tracked his teenage years, the jazz he studied in university, or his newfound love for hip-hop. He recently received his bachelors in music and education from York University and is passionate about writing and reviewing good (and less than good) music. Gerrod is also the drummer and songwriter for a Toronto based rock & roll band, One In The Chamber.
RELATED ARTICLES
album reviewalbum reviewssony music
9.0