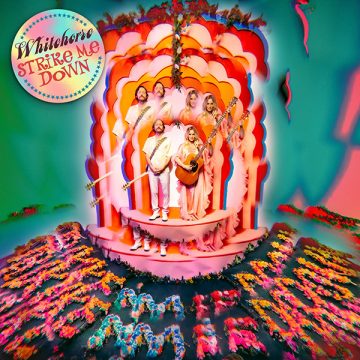 Whitehorse has maximized its musical prowess with Strike Me Down, its second full-length album release of this year, since early 2021’s Modern Love. The chemistry-laden Juno Awar-winning, wife-and-husband team of Melissa McClelland and Luke Doucet continue with their sensual, soulful rock sound, while dropping-in even more elements of catchy, groovy pop on this release.

Standout original tracks include the up-tempo opener and lead single “Am I Just Gonna Stand Here (While You Take My Girl Away)”, the nifty bass-laden disco vibe of “Why So Cruel”, and the splashy heartache “Sometimes Amy”. Another jim-dandy is the brilliant cover of Mazzy Star’s early ‘90s classic hit “Fade Into You”, which Whitehorse valiantly breathes new life into by creating a brooding, haunting duet rendition of this stunner which will undoubtedly be preferred by some over the original, which speaks volumes of this excellent remake.

Chock-full of strife, heartbreak and souls in need of saving, with Whitehorse’s Strike Me Down, there seems perpetually to exist an underlying feeling of hope, truth, and redemption amongst the dark clouds. Underdogs in love and life, Whitehorse pushes forward with a sultry energy that is contagious and kicks the door to darkness down, exposing an undeniable light. Strike Me Down is an impressive album that rivals all else that Whitehorse has thus far released.

John Graham is a Vancouver-area resident who typically spends most days admiring music of all genres. When not listening to music, John is usually at a live show, somewhere in the bowels of Vancouver.
RELATED ARTICLES
album reviewalbum reviewssix shooter records
8.0