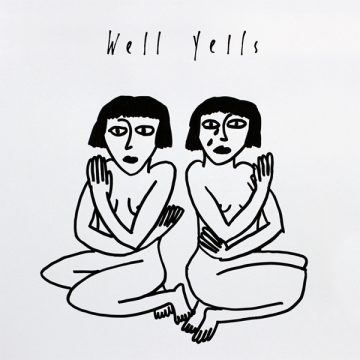 Well Yells, the night-time name of Patrick Holbrook, has returned with his third album in the last few years We Mirror the Dead, a brooding, ominous set of tracks that thump along with a heaviness and dread that is fitting of the title. He once said of this album that it was meant to “imagine our strange, likely grim future as people on earth,” and in that respect—as we all contemplate the supremely bizarre circumstances of a global pandemic—it has certainly succeeded.

Opening track “Kill the King” begins with an urgent, pulsating beat and Holbrook’s ethereal, Wayne Coynesque vocals. The lyrics are simple but evocative of another world entirely, as he chants “You gotta swing that thing/You gotta kill the king” as orchestral strings add a sense of dread to it all. “Form” is another fast-pumping song with warbly beats and vocals that build up to shrieking lyrics like “Sequence forms disease/nowledge forms scars” that conjure images of decay and mutation. “When” is a slower reprieve, but has just as much menace in it, and the vocals, drippy and oozing over percussive claps, create the sensation of attending an alien, supernatural ceremony of sorts.

The rest of the album continues the gloomy, wasted-world atmosphere established in the opening tracks. “Sand,” like “Kill the King”, features simple lyrics like “I’m underneath the sand/The sand is where I am/You just have to wave your hand,” but in the context of the industrial, droning, portentous sounds that make up this album they take on a dreamlike, surreal quality exhibiting a post-world struggle to communicate or express oneself.

Overall, this is a collection that is clearly designed and crafted to take the listener somewhere dark emotionally, or envision a dark, blasted-out world yet to come, and it accomplishes that effect well. In the end, this is a long-walk-with-your-headphones album, probably best enjoyed at night, hands in coat pocket. Just try not to trip over the scattered, broken pieces of the world you’ve all left behind while you’re at it.

Dan Kennard is an English teacher and fiction writer living outside Kansas City, Kansas where he lives with his wife and children. More about his work can be found at amazon.com/author/dankennard. You can also follow him on Twitter and Instagram @kennardistry or contact him at kennardistry@gmail.com.
RELATED ARTICLES
album reviewalbum reviews
10