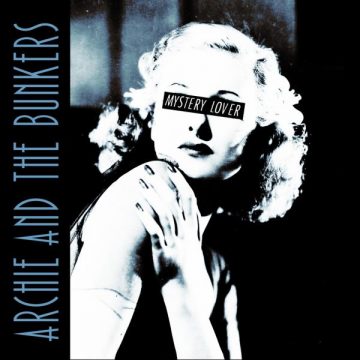 This is a strange time to live in, comrade, and Mystery Lover is an even stranger album. It can make you believe that you’ve been cartwheeled into the days of old. Confused, you might even ask yourself, “was I ever really there?” Well no, you weren’t, but Archie and the Bunkers has canned up some of the most chaotic sounds from the past and served it to you as a delicious stew.

With growling baritone vocals and a heavy, buzzing organ, the boys sound deeply influenced by the likes of Ray Manzarek and Jim Morrison of The Doors. However, songs like “All That Lovin’” can take a turn just at the right moment, speeding up into a frenzy of supersonic Punk inspired by legends such as The Stooges and the Sex Pistols. But if you’re not ready for the ride, you might get whiplash.

Mystery Lover has pulled away from the production angle of music, and the O’Connor brothers have been making crude Punk fuelled by their teen angst.

Lyrics from “The Moon and Six Pence” go as follows: “I’m outta my mind, and I have lost control, there is so much hate in my heart, and it’s tearing me apart…”

This is what real Punk Rock’s all about — anarchy — and it took two boys who have yet to meet manhood to remind us all.

Archie and the Bunkers consists of 17-year old Emmett on a four-piece drum kit and his 15-year old brother Cullen on the organ. The brothers released two albums from their basement before releasing Mystery Lover with Dirty Water Records, based in the UK.

Robert Janes is a journalist and conversationalist from Guelph, ON. He wears his pants with a belt and most likely listens to the same music as your parents.
RELATED ARTICLES
archie and the bunkers
7.0

SPILL MUSIC PREMIERE: ARCHIE AND THE BUNKERS – “YOU’RE MY PACEMAKER”

by SPILL NEW MUSIC on May 23, 2017
ARCHIE AND THE BUNKERS – “YOU’RE MY PACEMAKER” A Spill Exclusive Music Premiere Straight from the city of Cleveland Ohio- the home of The Electric Eels, [...]