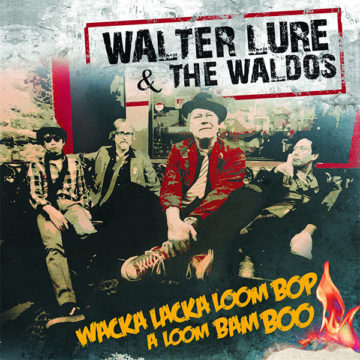 It has been almost 25 years since Walter Lure has released a studio album. Many know the name from his time with Johnny Thunder and The Heartbreakers and his work with The Ramones. In 1994, Lure released the debut Waldos album (Rent Party), and since then there have been a handful of live albums, but nothing in terms of new music or studio recordings from this icon. He was playing live and guesting with other artists (he did a tour with Sex Pistols’ original bass player Glen Matlock) but for those of us not living in Queens, it was pretty quiet on the Lure front, until now that is.

The album is exactly what you would expect from Lure and company. Take no prisoners rock ‘n‘ roll. I am not going to call this punk, although “Crazy Kids” sounds more like The Sex Pistols than Johnny Thunders and The Heartbreakers, but the rest of the album is Lure’s distinct style of rock and roll.

And do not be fooled, this is a band effort. He has a strong, tight band. The current line-up includes Joe Rizzo (drums and vocals), Tak Nakai (guitar and vocals) and Takanori Ichiuji (bass).  The whole band contributes to writing the songs as well. Guests on the album include Joey Pinter (Knots) provides a brilliant guitar solo on “Take A Chance On Me” while producer Andy Shernoff provides the perfect backing vocals throughout.

Lure does not forget his roots with Johnny Thunders. He has recorded a song he co-wrote with Johnny Thunders (“London Boys”, a cutting reply to The Sex Pistols song “New York”) and the song “Crazy Kids”, which has been used in the film Thunders: Room 37, a film about Johnny Thunders’ last few days. It is a wonderful tribute and he manages to capture the essence of punk rock circa 1976. This is not an easy task.

Lure is in the position of being one of the elder spokesman from a different era. Wacka Lacka Loom Bop A Loom Bam Boo is not a statement or a manifesto. He does not want to come across as a relic and to that end he has put together an album of songs that are current and focused on the here and now. It is not political but it does make a point. The album is about relationships, youth, and life and some could argue that is about as political as it gets.

Lure does not want to be in a position of telling his fans or listeners what to do or think. The original punk movement was always about choice and voicing one’s own opinion. Here, Lure and company set out to write and produce a rock  rock’n’roll album and in the end, that is exactly what Wacka Lacka Loom Bop A Loom Bam Boo is, a great rock ‘n‘ roll album.

Born and raised in Whitby, Aaron discovered music through his love of The Beatles. This led to a career in radio, writing for various publications, and ultimately a radio show about The Beatles (Beatles Universe), which ran for over four years. When not immersed in music, Aaron enjoys spending time with the loves of his life -- his wife Andrea, and daughters Emily and Linda (all of whom have an intense love of music too).
RELATED ARTICLES
album reviewalbum reviewscrazy kids
7.0