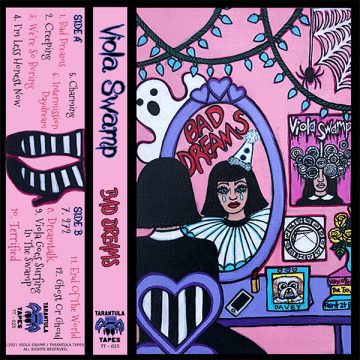 Under the name Viola Swamp, Ontario based punk badass Taylor Cos (Hysterics, formerly of The Anti-Queens) has released her debut solo album. Bad Dreams, released via Tarantula Tapes, The album follows her 2020 single, “272/Creeping” and 2021’s “I’m Less Honest Now” with Cos also being featured on the latest Hysterics EP, Sleep and The Anti-Queens’ seminal 2018 self-titled album.

Bad Dreams opens on a haunting note with the atmospheric keyboard and sound effects of the title track. The unsettling album opener hints at the darker undertones featured throughout the rest of the record, even if they are far more sublime. The following track, and first true song, “Creeping” featuring a driving bass, accented by a smooth synth melody, further accented by Cos’ vocals. While there is nothing outwardly haunting or dark about the song, there is an underlying and unsettling vibe to the song which goes against the sickly-sweet melodies.

While the songwriting and performance across Bad Dreams is simple, the album excels as creating and maintaining its initial haunting energy throughout various punk and alternative influenced songs. Whether it’s the power chord crushing “Charming”, the ambient “I’m Less Honest Now”, and the melancholic “272”, the vibe established by the opening title-track carries throughout the album even as Cos shifts musical styles and tones. Additional highlights include the jazzy, cinematic, and Fiona Apple inspired “Terrified”, and the closing Ghost Or Ghoul”, a pair of songs that truly feel unique to Cos and among the rest of the album.

Bad Dreams is a punk and alternative sound experiment which sees Cos take on a number of different styles and infuses her own unique and twisted style of songwriting. The record as a whole has a chilling sense to it that, no matter how sweet the melodies or how poppy the songs may be, you will not shake. With hints of Radiohead, Nine Inch Nails, and Fiona Apple, Cos’ debut album as Viola Swamp is a strong record that will leave you curious and, more importantly, excited for what else is to come.

A passion for music has always been a part of Gerrod’s life. As a young boy, he was raised on a steady diet of the music from The Chili Peppers, Aerosmith, The Stones, Prince, and others from his mum. Raised in the GTA, Gerrod continued to foster his love for music by attending a wide range of concerts and learning the drums. His unapologetic passion for music has no bounds and has spread to a wide variety of styles, whether it be the 90’s rock that sound tracked his teenage years, the jazz he studied in university, or his newfound love for hip-hop. He recently received his bachelors in music and education from York University and is passionate about writing and reviewing good (and less than good) music. Gerrod is also the drummer and songwriter for a Toronto based rock & roll band, One In The Chamber.
RELATED ARTICLES
album reviewalbum reviewsbad dreams
8.0