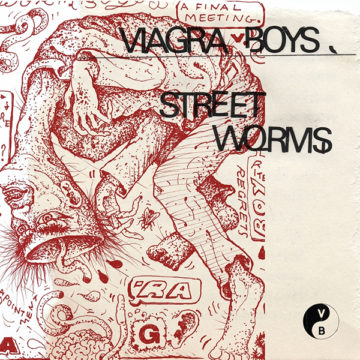 From the capital of Sweden comes a post-punk act called Viagra Boys, having just released their debut album Street Worms. This release is quite intense and in-your-face with an alcohol and drug-infused setup. The septet, which includes American-born frontman and vocalist Sebastian Murphy, is balancing on an ironic edge between humor and drunkenness in their music. Their songs include weird raving lyrics, which actually DO have a message they’re trying to put out — it’s a long way from the bottom of society when you’re a loser who dreams of being a solid and good citizen (just as Murphy felt when he lived on the streets in Stockholm before joining the band). As he sings in “Just Like You”:

It was all a dream/
But it was so nice/
I had a nice house/
And such a loving wife/
We had a little dog/
Such a little dog/
That it reminded me of a large dog/
Just in miniature size.

But on the track “Sports” he returns back to flippant irony:

From a Scandinavian record player in the middle of Copenhagen Jens Trapp brings you some new Scandinavian stuff. His favorite albums include: David Bowie: Honky Dory and Ziggy Stardust plus everything until Let's Dance The Clash: London Calling Elvis Costello: This Year's Model Genesis: The Lamb Lies Down on Broadway Pink Floyd: especially Wish You Were Here If I should name one, but most of it will do ;-)
RELATED ARTICLES
album reviewalbum reviews
8.0