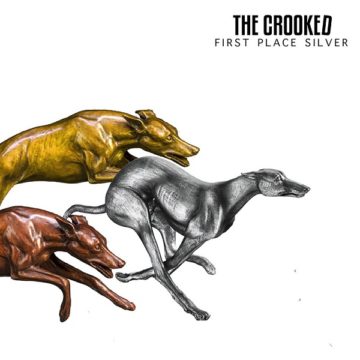 The Crooked is the brain child of guitarist and lead vocalist J.C. Sandoval (Die Mannequin/Secret Broadcast/Savanah) and Anthony Dell’Orso (The Joy Arson). Forming a little over a year ago with the addition of lead guitarist Neelesh V, and bassist Russ Shipman (The Darkstone Crows), the band is now releasing their second EP, First Place Silver, the followup to their debut EP The Shoebox Sessions.

The album is a collection of five songs chock-full of complex rhythm patterns and unusual time signatures (self-described as “crooked”), outstanding vocal harmonies which at times are nothing short of explosive, creative use of feedback along with screeching guitar solos, and melodic chord arrangements at times leaning to glam rock. The musicianship and instrumentation here are strong. The guitars and drums riffs are wild, dominant forces, with the bass line serving as the chain that anchors them all together. The album was produced, mixed, and engineered by Ted Sevdalis, and the sound production is excellent.

First Place Silver opens with lead single “Dog Days”, which is aptly introduced by a barking dog (Tico? Is that you?). The track’s high-speed, driving guitar riffs, explosive vocal harmonies, and pounding drum beats could just as easily be kicking off a James Bond soundtrack. Up next comes “Empathy”, with its first few bars deceiving us into thinking this is the album’s token ballad, with its breezy chords. The tune quickly morphs into a mid-tempo, semi power-pop tune. Next up comes “Watch Me Burn”, a hard-driving number showcasing great vocal tracks and vocal harmonies, and blistering guitar solos, a powerful track which could clearly be the album’s next single. Close you eyes and you can feel the searing firestorm. The album is rounded off with “Luxury Prison”, as well as the inclusion of “I Didn’t Know”, a winning track and single off their debut EP.

In the short year since their formation, The Crooked have come a long way. This is not a surprise. With a winning combination of great songs and roster of outstanding musicians, theirs is a recipe that can’t fail. My prediction, however, is that their journey to success will not be crooked at all, but straight up. Can’t wait to see what the future has in store for The Crooked.

Trish Melanson lives in the Toronto area with her three boys, Nicholas, Justin, and Eric, her dog Jakkson, and her cats Max and Jagger. She is the former host and producer of Canadian Kickass, a weekly two hour radio show on New Jersey's Chestnut Radio, showcasing Canadian Music. She is also a former Web Content Manager of Indie Soundscapes, an online showcase for Independent Music Artists Worldwide, and was a regular music contributor to The Stroumboulopouli. She is a fervent supporter of the Toronto live music scene. In a past life she was a teacher and Vice Principal in Durham Region. She has many more new and exciting projects waiting in the wings. ;)
RELATED ARTICLES
album reviewalbum reviewsfirst place silver
8.0