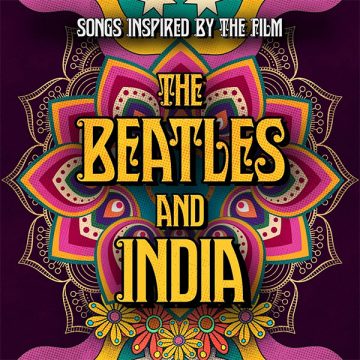 Songs Inspired By The Film The Beatles And India is not what you expect. This is a two CD set to accompany the new documentary The Beatles And India. The first CD being covers of Beatles songs and the second CD being instrumental film music. The film, from which this CD is derived, is a brand new documentary about the time The Beatles spent in India. Interestingly most of the songs covered are songs that The Beatles wrote during their stay in India. This means that there are a number of songs from The Beatles (The White Album), plus a few surprises. The three exceptions are “Norwegian Wood (This Bird has Flown)”, “Love You To”, and “Tomorrow Never Knows”.

The covers are by some great artists (all from India), and their take on The Beatles songs are quite faithful to the original (such as Karsh Kayle and Benny Dayal’s cover of “Mother Nature’s Son”) while others are complete deconstructions (such as Nikhi D’Souza’s very unique and stunning cover of “Martha My Dear”), while others are complete overhauls of the original (check out Ragga Trippin’s interesting version of “The Continuing Story Of Bungalow Bill”). It is also lovely to hear Anoushka Shankar and Karsh Kale’s beautiful remake of “The Inner Light”. What is interesting is that, although there is the influence of classical Indian music, the songs are remarkably modern and much more Western in style.

Artists also tackle some solo Beatles songs (such as “Gimme Some Truth” which was originally released by John Lennon on his 1971 album Imagine) and one song that remained unreleased for many years (“India, India”). But the artists, while sticking close to the source material, still infuse their style and their own sounds. It makes for an incredible listening experience. It also makes one aware that there is more going on in the music scene in India than the traditional classical music and ‘Bollywood’.

While the covers are interesting and quite enjoyable, the real highlight from this ‘soundtrack’ is the second disc containing the film music written and performed by Benji Merrison, perhaps best known for his music on BBC’s Green Planet. Much like Harrison, Merrison has written music that incorporates classical Indian music into Western classical music with a tinge of pop/rock. Having not seen the film, much like the first disc, it still works on its own. I am reminded of the classic soundtracks which evoke a definite sense of travel. One can imagine the visuals as the music plays. It is melodic, and, at times, quite subtly majestic.

Born and raised in Whitby, Aaron discovered music through his love of The Beatles. This led to a career in radio, writing for various publications, and ultimately a radio show about The Beatles (Beatles Universe), which ran for over four years. When not immersed in music, Aaron enjoys spending time with the loves of his life -- his wife Andrea, and daughters Emily and Linda (all of whom have an intense love of music too).
RELATED ARTICLES
album reviewalbum reviewssilva screen records
9.0