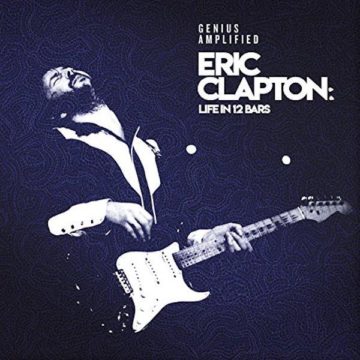 Soundtracks of documentaries about musicians are interesting things and excellent opportunities to collect well known songs as a ‘best of’ or to issue an album of previously unreleased material. Life In 12 Bars, the Original Soundtrack to the documentary of Eric Clapton does both.

Life In 12 Bars serves as an excellent sampling of music by Clapton from the very beginning of his career with The Yardbirds ending with his solo career. This includes music from his groups, John Mayall and The Bluesbreakers, Cream, Blind Faith,and Derek and The Dominos. But also included in this album is music from his musical mentors (Muddy Waters and Big Bill Broonzy) as well as session work he did for Aretha Franklin, The Beatles, George Harrison and Delaney and Bonnie.

The real gems for this soundtrack are the five previously unreleased songs, which makes purchasing the album essential, as the unreleased songs are brilliant and essential. The growning glory of Life In 12 Bars is the seventeen minute, live version of “Spoonful” (originally from the album, Fresh Cream, 1966). This recording from Cream’s farewell tour is worth the price of the album alone. Also quite interesting (and brilliant) is the full length version of “I Shot The Sheriff” (original version on 461 Ocean Blvd., 1974). There are three other songs as well.

The thing about listening to Life In 12 Bars, is the progression of Clapton and his playing. The listener can hear him develop his distinct guitar style. But, one can hear him use session work as almost experimental opportunities. And his guitar works in these situations. Listen to his work on “While My Guitar Gently Weeps” (The Beatles, 1968) or Aretha Franklin’s “Good To Me As I Am To You” (Lady Soul, 1968). His playing is brilliant and he becomes part of the song while standing out. This is a difficult task but he achieves it.

When Clapton was in John Mayall and The Bluesbreakers graffiti was found in London, “Clapton is God”. While he may not be a deity, he is most definitely one of the most influential and greatest rock/blues guitarists in the last century. This album does an excellent job in explaining why he is so highly regarded.

Life In 12 Bars will be an excellent introduction to this great artist and casual fans will enjoy the selection. The album is jammed full of classic rock hits and many will be happy to have all the songs in one collection. Diehard fans will love the previously unreleased material, as well as some of the older material. It is a well thought out compilation and one of the better Clapton collections.

Born and raised in Whitby, Aaron discovered music through his love of The Beatles. This led to a career in radio, writing for various publications, and ultimately a radio show about The Beatles (Beatles Universe), which ran for over four years. When not immersed in music, Aaron enjoys spending time with the loves of his life -- his wife Andrea, and daughters Emily and Linda (all of whom have an intense love of music too).
RELATED ARTICLES
album reviewalbum reviewseric clapton
8.0