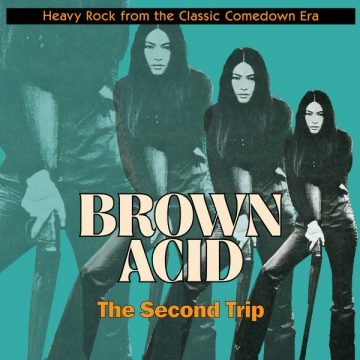 Brown Acid “The Second Trip” is the second edition of a wildly successful compilation series. RidingEasy Records had the challenging task of tracking down a series of unique lesser-known bands from the ‘60s and ‘70s and compiled a rare look into the gritty sounds of “Proto-Stoner-Psych” singles from the ‘60s and ‘70s. It’s dirty, authentic, and follows the hype of the previous compilation with a raw in-your-face rock ‘n’ roll approach. It’s time to roll up a sweet Thai stick on your old album sleeve, put on some dusty oversized headphones and give this rare piece of rock history a spin.

Barresi stated on the RidingEasy Records website about the difficulty of putting the album together, “I essentially go through hell and high water just to find these records.  Once I find a record worthy of tracking, I begin the (sometimes) extremely arduous process of contacting the band members and encouraging them to take part. Daniel and I agree that licensing all the tracks we’re using for Brown Acid is best for everyone involved, (rather than simply bootlegging the tracks).” “When all of the bands and labels haven’t existed for 30-40 years or more, tracking down the creators gives all of these tunes a real second chance at success,” the site also states.

The album opens with “Midnight Witch” by Ash, originally released in 1970 on Havoc Records (New Zealand) and written by Doug Ford. A bold fuzzy barnburner that you’d be surprised wasn’t a young Ozzy, with its raw vocals, heavy bass lines combined with the gritty guitar chugs and wailing riffs. A vocal to guitar harmony I have a soft spot for makes an appearance throughout the song and is probably my favourite song on the album due to its early doom/stoner rock sound. Similar to the stylings of Sabbath or Pentagram and is a great way to start off this album.

Track two is “Warlords” by Sweet Crystal. This song is a little smoother than the prior with long hanging vocals that lead to a well-timed cackle all over electronic synthesized organs. Their sound could be compared to Deep Purple. It was originally released in 1977 on Fiddlers Music Company (United States).

Track three, “Rock and Roll Man,” lies somewhere between Jethro Tull and CCR as a classic rock ‘n’ roll guitar progression that makes you want to get up and dance. It’s a happy-go-lucky song with blues riffs that drive the song forward. It was originally released in 1973 on Criket Records (United States).

Next on the List is “TAKE IT!” by Crossfield. A repetitive track with a lot of sexual tension that evolves into a phaser-infused trance and topped off with a sweet little guitar lick. It was originally released in 1970 on Toy Toy Toy Records for your listening pleasure.

Track five is a real treat. This previously recorded track was from 1978 but remained unrealized until now. It’s titled “Bell Park Loon” and performed by Spiny Norman. If there’s one thing modern rock should be taking notes from this is it – we need more pan flutes! The rugged riffs blasting through a fuzzy guit-box combined with grainy vocals and sweeping pan flute solos creates a unique musical mixture that a real rock enthusiast can enjoy. It’s a shame it wasn’t released because I’m sure it would have been well received, but we can appreciate its experimental sound now.

The Glass Sun’s “Silence of the Morning” is up next. It’s a great sing-along headbanger with a hell of a drum fill in the middle that you can’t help but try and air drum along. Some standard guitar riffs and loud crashing cymbals are quite predominant throughout the song as they battle for sound with the Iron Butterfly-esque vocal lead. Its original release was in 1971 on Sound Patterns Records.

Following that is “Love to You” by Volt Rush Band and originally released in 1977 on Red Rock Records. It’s abrupt, loud and has a high-pitched mournful whine of a guitar over what sounds to be a blown out amplifier. Overall a good song with lyrics confessing the singer’s love to a girl but worth turning down a few notches to save your ear drums for the rest of the album.

Buck follows with “Long Hot Highway,” a track about living freely and was originally released in 1975 on Silk Banana Records. The road has been a common theme among classic rock, based usually on experiences of life on the road. This one, however, is about a man hitchhiking down a long hot highway trying to get a ride. The piece also features an electronic organ solo that fades out into the end of the song.

As the album comes to an end, in comes “Show Stopper” by Iron Knowledge. It contains high-pitched vocals over catchy bowing bass lines that keep the beat throughout. Its brassy lyrics over the instruments would be a fantastic opening song for a booming live show to really capture people’s attention and energize an audience. It was originally released in 1972 on Tammy Records.

The album finishes up with “Daybreak” performed by Sonny Hugg. An Immediate guitar hook draws you in and steady pace of percussion begins the song. This track is very vocal centric for me with a good range a howling chorus of “Daybreak!” There are also some respectable vocal harmonies. Underneath it all, along with your typical classic rock guitar solo, is an interesting funky jazz fusion-sounding keyboard that builds up the following guitar wails and bends. The final track was originally released in 1970 on Silo Records.

Overall this album is a true blast from the past. Bring to life a romantic look into the true raw sounds of classic rock ‘n’ roll that may have been overlooked from the ‘60s and ‘70s. It’s a treat to discover these fantastic bands that may have been overshadowed by some of the other greats of the era.  Anyone who has any interest in rock and especially loves the classics like Zeppelin and Sabbath need to pay Brown Acid a proper tribute. I will continue to play this album loud and proud and appreciate the hard work going into A.) tracking these songs down and B.) getting licensing permission from the wide variety of artists involved. I look forward to a third trip down rock ‘n’ roll lane in the future.

Side Note: Brown Acid Refers to the Woodstock Festival in 1969, when stage announcements were made by legendary radio disc jockey Wavy Gravy, telling people that some of the brown-coloured blotter acid (LSD) circulating the crowd was giving people negative hallucinations, causing freakouts.