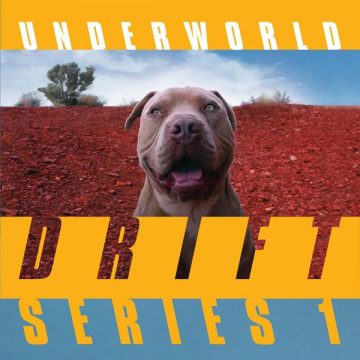 Underworld was born of the ashes of the breakup of Freur in 1988. The duo, consisting  of Karl Hyde and Rick Smith, have never sounded better, and they continue to come up with creative and novel ideas. After touring extensively and collaborating with Iggy Pop,they embarked on an ambitious year-long multi-media project, the result of which is compiled on this seven-CD and single Blu-ray collection titled Drift Series 1.

To put it simply, this is electronica at its best. The music ranges from dance-oriented to melodic, melancholic pieces. The loud pounding synths juxtapose the beautiful piano, and it all flows together. At just shy of six hours, it is one hell of a time investment, but it is worth it, as there is enough variety here to keep the listener invested.

Drift 1 has many instrumental tracks and its vocal tracks are astounding. At times the use of vocalsis reminiscent of Kraftwerk, but is still distinctly Underworld. The set twists and turns in many directions. The highlights are numerous, but some tracks do stand out, such as the moving “Doris.” This track is the score of an installation of Manchester Street Poet, and the melody is sublime, but there are many tracks worthy of your attention.

Elsewhere the music sounds as if the band is merely jamming and improvising. The energy of “Imagine A Box” is a good example of this. Then there are the dubs spread throughout as well, which are always entertaining and unexpected. With so many songs, one does not really know what to expect next, but then, that’s how it goes with Underworld. They have never been a band to play it safe.

It is a long set to get through. Not everything works, but there is so much on Drift 1 that any tracks that don’t work meld together into those that do. Underworld continues to sound energetic and enthusiastic about what they are doing. The whole project is exceptional and shows off a band still in its prime.

Born and raised in Whitby, Aaron discovered music through his love of The Beatles. This led to a career in radio, writing for various publications, and ultimately a radio show about The Beatles (Beatles Universe), which ran for over four years. When not immersed in music, Aaron enjoys spending time with the loves of his life -- his wife Andrea, and daughters Emily and Linda (all of whom have an intense love of music too).
RELATED ARTICLES
album reviewalbum reviewscaroline records
8.0