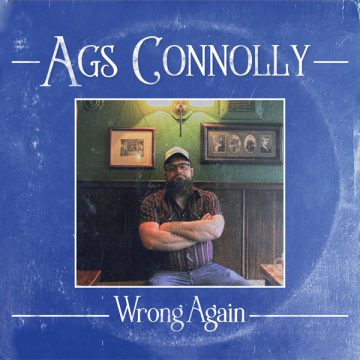 There is much to like about Wrong Again by Ags Connolly. It starts with the sleeve, which looks like a well-worn, much-loved album. Then there is the exceptional music inside that sleeve. Wrong Again is pure country, and it is so good you’ll have a hard time believing he is from Oxfordshire, England, far from the world of country music.

Wrong Again is Connolly’s third album, and this time, he has produced the album himself. He brings in a couple of guest stars including accordionist Michael Guerra and fiddle player Eamon McLoughlin. These musicians add to the overall feel of the album, and help Connolly achieve his goal, that of a near-perfect country album.

There’s no denying Connolly can write – the title track is worthy of admission alone – but he is also an excellent interpreter of songs. His cover of Gordon Lightfoot’s “Early Morning Rain” brings out not only the beauty of the song but also the intense sadness. In Connolly’s hands the song aches and lives up to the promised pain.

Connolly has a clear understanding of country music. He has done more than his homework with this one – he sounds like he has the lived experience. From the honkytonks to the swing country tunes to the ballads, this album is astounding from beginning to end. He does not copy the masters, but he is aware of them. He has learned their music and developed his own sound from those sources. In a just world, he would be as big, if not bigger, than Chris Stapleton.

Sadly, ‘country’ is sometimes seen as a negative term, and many have resorted to the term ‘Americana’ instead, which is its own worthy genre of music. In this case, I have no problem saying that Connolly is real country, and I think he would be proud to be labelled as such. Wrong Again is a superb album, and one that deserves your attention.