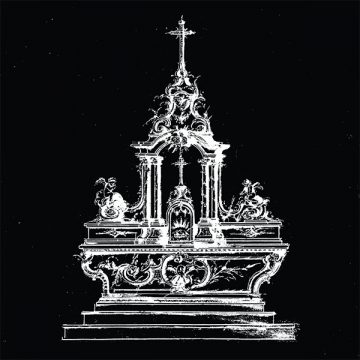 Darkwave duo du jour, Twin Tribes, have released Altars, a remix album that encompasses their first two records. Twin Tribes, like the new era of dark wave bands She Past Away and Drab Majesty, has mastered the art of having only two band members but sounding like a full-fledged 1980s goth group.

The first major highlight is the Luz Futuro remix of “Dark Crystal”, which changes the song to an up-tempo dance number that feels like a soccer mom workout song. The best part of it is exceptional, and is the opposite of most remixes on the album, making it stand out. On Ash Code remix of “Fantasmas”, the time the needle goes all the way dark. It is evil in all the right ways, with a creepy intro and specter whispers, reminiscent of old Christian Death.

Almost all of the songs here are completely changed in tempo and feel, and the contributing artists really made an attempt to make the new versions their own. Take the syncopated remix version of “Shadows” — it makes a straight up Twin Shadows song feel like a B-side from Tears for Fears.

Lastly, my favorite Twin Shadows remix, “Into the Void” by She Past Away, is a complete departure, or at least drastically different from, a danceable song. This remix is taking a song and reinterpreting it as if they had written it themselves, and not just in style. It does not feel like a computer-spliced Dance remix, but rather it makes  a real contribution to the mood and to the point the original was trying to make.

Overall, this record is a great companion to add to the two previous powerhouse releases from Twin Tribes.

Ex-pat living in Geneva, Switzerland from the hard streets of Baltimore, Maryland. Ex-radio-monkey and avid listener of all things that are supposed to be cool.
RELATED ARTICLES
album reviewalbum reviewsmanic depression
8.0