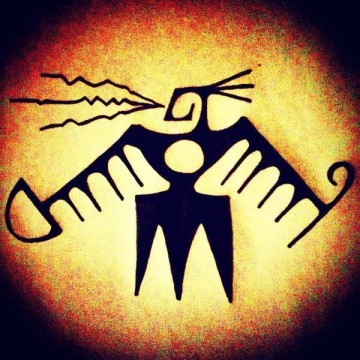 Under the new handle Skilled Mechanics, Tricky once again brings us cutting-edge talent from the most unlikely corners of the music world. Tricky’s mercurial tastes birthed some of the most dubious yet genial style fusions of the past couple decades; he’s dabbled in everything from punk to blues to …whatever Björk is.

For this new album Trickyreunited longtime friends DJ Milo from The Wild Bunch incubator, and Francesca Belmonte, the muse of his recent few albums, and interspersed them with non sequitur performances like Luke Harris doing a vocal cover of a nu metal ballad, and 2013 Chinese Idol star Ivy (艾菲) dropping bilingual raps.

This album is utter chaos, manic turmoil concealed under a thin veneer of cool, and the evident tension is absolutely delicious!

The Skilled Mechanics moniker is ostensibly a reference to political assassins from a British documentary on espionage. The cynical origin of the name is fitting to the oppressive atmosphere of this down-tempo album. The clipped guitar twangs in “I’m Not Going (feat. Oh Land)” are as ominous as a bullet sliding into its chamber, while Tricky’s characteristic smooth drawl in “Don’t Go” drips with scorn as he confesses “It’s my fault. . . my life, my pain.”

In the gloomy depths of the album, “Beijing to Berlin” is like a kick in the stones. Ivy sounds like somebody tried to run a Nicki Minaj tape through Skype Translate. Skilled Mechanics reengineers her trending Mandarin-English pidgin into a truculent and feisty trip hop track. Thereafter, “Here My Dear” and “Well” have a slick futurist appeal, with cataclysmic analogue synth keys laid atop minimal, staccato beats that carry into the choppy pulse of “Necessary (feat. Milo).”

It’s delightful to hear Tricky’s voice again after the prolonged, self-imposed hiatus from the lyrical limelight. His last record Adrian Thaws was a triumphant return of the true artist and poet, and the trend continues on this new release. Tricky is an acclaimed storyteller – the collected, cool tone he affects in “Boy” is a jarring juxtaposition to the traumatic events he describes. Tricky’s troubled past is a matter of public record, yet this new track is hardly a renewed plight for sympathy: disguised in the pragmatic timbre of his vocals is the sound of a tourniquet snapping, releasing a harrowing outpour of internalized horror.

The quirkier tracks on the first Skilled Mechanics disc, namely “Beijing to Berlin” and “Diving Away,” were pre-released as singles, which was an unfortunate spoiler. The remaining 11 tracks are mostly less than three minutes long, which may tempt one to dismiss this album as unfulfilling. Yet that seemingly haphazard style is Tricky’s trademark indulgent idiosyncrasy. Skilled Mechanics feels like someone flung a fistful of white labels in your face at a Bristol underground show, which is a sly and conscious salute to Tricky’s own history in the British music scene.

I’m a geeky weirdo with her fingers in all sorts of pies. I paint and illustrate all sorts of nonsense, I make strange noises. I rant and rave, set things on fire, I’m an awesome cook and I throw a mean party.
RELATED ARTICLES
album reviewsdj milofalse idols
8.0