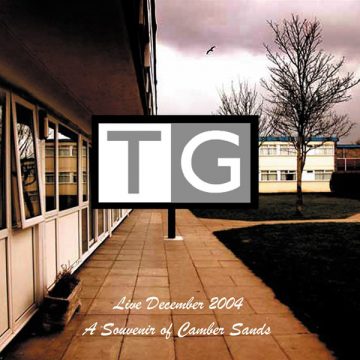 In 2004, Throbbing Gristle reformed after calling it a day in 1981. The original lineup put aside their differences, and that year released a live album, A Souvenir Of Camber Sands is the live album, and it was originally released in 2004. What makes this album so very interesting is that it was released a full three years before their next studio album and, in true Throbbing Gristle fashion, many of the songs performed live here found their way on to their ‘reunion’ album, Part Two – The Endless Not.

I never saw Throbbing Gristle live, although I truly wish I had, given the audio recordings heard here of their concerts. They must have been something else. An industrial band performing live, long before computers could be used on stage. They may have used tapes, and loops, but the sounds you heard on that stage were being created by four very talented individuals. A Souvenir Of Camber Sands captures the band at the Camber Sands venue.

The other interesting thing about  A Souvenir Of Camber Sands , was that it was available to fans who attended the show the same night, right after the concert. CDs were burned and sold to the audience, and leftover copies were given to Mute Records to sell. So, it is safe to say that this has been a long sought-after CD for many years, and the good folks at Mute Records have brought it into wide circulation, and I am glad they did.

The performance and the CD were both dedicated to the memory of John Balance, a pioneer in industrial music, who formed the influential band Coil with Peter Christopherson. He had passed away in November, 2004.

Early versions of songs from  The Part Two – Endless Not, such as “Greasy Spoon”, “Almost A Kiss” (Titled “Almost Like This” on this recording) and “Splitting Sky” (from the E.P. TG Now), sound similar but there are differences. Of course they revisit some older songs as well such as “Hamburger Lady” and “Wall Of Sound”, plus some newer songs that they never recorded in the studio such as “Live Ray” and “Fed Up”.

In the end fans have an amazing live album; a pure live album, with no tampering, and it sounds as good today as it did 12 years ago. The production is top-notch and Throbbing Gristle were on their game that night. Welcome back to the music world, A Souvenir Of Camber Sands.

Born and raised in Whitby, Aaron discovered music through his love of The Beatles. This led to a career in radio, writing for various publications, and ultimately a radio show about The Beatles (Beatles Universe), which ran for over four years. When not immersed in music, Aaron enjoys spending time with the loves of his life -- his wife Andrea, and daughters Emily and Linda (all of whom have an intense love of music too).
RELATED ARTICLES
album reviewalbum reviewsmute records
10