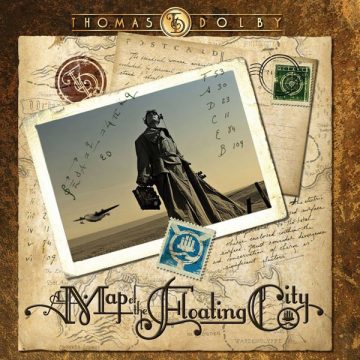 I’ve never been a big fan of the whole ‘80s synth-sound. For me the word ‘music’ gathers in itself a different connotation: dark guitar riffs, drum beats, alluring lead singers with croaky voices, and the smell of beer and cigarettes.

Thomas Dolby’s Map of the Floating City is neither a Rock album, nor has anything to do with the ‘80s Pop sound that he is famous for. The division of the album in three parts is a quite interesting experience. Amerikana, Urbanoia and Oceana reflect three separate periods of Dolby’s life and you can hear that in every song, which sounds completely different from the previous one. It’s an album that has it all. From Country to Folk, Oriental rhythms to Balkan sounds; it’s like a bouquet, a colourful mixture of different cultures. This is an album full of surprises. When listening for the first time and until the last song you keep wondering what’s going to come next. Here I put an end to everything good that I can say about this record.

“Nothing New Under the Sun” is actually nothing new under the sun. It’s a little bit shocking when you hear for the first time a song that gathers in itself a bad interpretation of Goran Bregovic, a cheesy Bollywood movie theme song and a Pop hit from the ‘80s. Yes, this is all in the same song. “Spice Train” took me on a journey through all my worst nightmares, when it comes to ‘how-not-to-do’ music.
If you listen to this album a sufficient number of times, you can actually find a couple of decent songs that are worth listening to, like “Road to Reno” and “17 Hills.” Songs, that you can easily add to your Sunday track list. The bottom point is that,you could give Map of the Floating City a try if you want to, but if you’re not eager to buy the record, you won’t miss anything much.