SPILL ALBUM REVIEW: SCOTT WEILAND – THE MOST WONDERFUL TIME OF THE YEAR 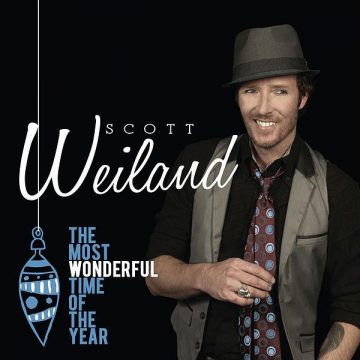 Scott Weiland
The Most Wonderful Time of the Year
Softdrive Records

Commercialism and consumerism can easily bring out the Grinch in even the most ardent Christmas enthusiast. It seems as though nobody’s immune to picking the pockets of their fans with some sappy yuletide wishes. Bono once informed everyone that “There won’t be snow in Africa this Christmas,” Bob Dylan had a disaster of a Christmas album in 2009 (Christmas in the Heart), and Michael Buble is currently robbing your parents of their hard-earned money with his cleverly titled album, Christmas. So it’s easy to be skeptical of a recovered junky releasing seasonal wishes through song. But like a diamond in a pile of coal comes former-Stone Temple Pilots frontman, Scott Weiland. Here we have nine freshly minted renditions of classic Christmas cuts (and for good measure a Weiland original, “Merry Christmas and Many More”).

The album kicks off inconspicuously enough with some simple lounge versions of “The Christmas Song” and “I’ll Be Home For Christmas.” These tracks are the equivalent of getting into your stocking before being allowed to attack the real presents under the tree – which is Weiland harnessing his inner Bing Crosby with “White Christmas.” It hits smooth and eggnog-soaked, conjuring images of the singer sitting at his desk writing Christmas cards. From there we get a little Spanish spice added to “Silent Night.” And if you’re the kind of person who wonders why Hawaii (“Mele Kalikmaka”) and the Caribbean (“Feliz Navidad”) are amongst the few Worldly Christmas tunes, then you’ll be glad to hear that “O Holy Night” also gets some special treatment with the addition of a Reggae beat. These tracks are exactly the album needs – they’re fun and just a little silly, full of kitsch, but leave all sense of pretention at the door.

Musically, this is classic Christmas – festive and joyous. And then Weiland steps in doing his best impersonation of a drunken-Sinatra. This may sound out of place for the rocker, but let’s not forget that this isn’t the first time that Weiland has unleashed the croon. When not impersonating Layne Staley for S.T.P.’s debut, Core (1992), Weiland swaggers and drawls like Mel Torme with Grunge guitars at his back. And then of course there’s the infamous ‘hidden track’ from ‘94’s Purple, which turns out to be nothing more than an audition for this release.
The Most Wonderful Time of the Year likely won’t reach classic Christmas album status. But once you’ve run out of Sinatra and Bing records, and before Phil Spector’s Christmas Album (1963) begins to lose a little lustre, give Scott Weiland a spin. And don’t forget to have yourself a very merry Christmas.

SPILL ALBUM REVIEW: SCOTT WEILAND – THE MOST WONDERFUL TIME OF THE YEAR