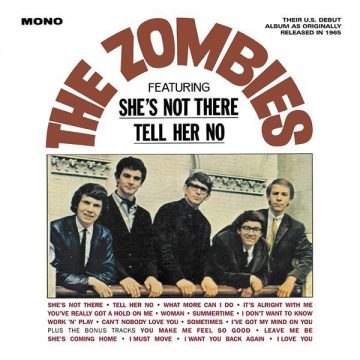 The Zombies’ self-titled US debut was quite typical of ‘60s English bands. Common in those days, the US release would differ slightly from its UK counterpart which, in this case, is Begin Here. Aside from the change in title, inclusion of the single “Tell Her No” and the shuffle of tracklist, it is essentially the same record.

While record collecting purists may prefer Begin Here, the US album is probably the more accessible version. The American cover features a smiling group shot and the band’s name in big red letters at the top. In comparison to the more artistic take of the UK version, where the band can be seen against a stark green background and dour expressions on their faces

Like most British Invasion groups at the time, the LPs would consist of original compositions accompanied by popular R&B numbers of the day. In the case of The Zombies, they have included “You’ve Really Got A Hold On Me/Bring It On Home To Me”, and “I’ve Got My Mojo Working”. While the band pulls off convincing covers of the songs, they don’t quite live up to the originals. However, their take on the Gershwin classic, “Summertime” may possibly be the best version of this widely covered song.

The Zombies is a strong but not incredible debut and follows most of the trends of the day. It shows promise with hints, rather than an abundance, of brilliance.

As a child growing up in the suburbs, Ryan found music as a way to soothe his boredom. After first hearing AC/DC at the age of 10, he was hooked on music. Tracing its roots to the ‘50s, he became obsessed with Elvis, Buddy Holly and Chuck Berry. Somehow that led to grunge, then psych-rock, then jazz, etc. The list goes on and on and his collection of vinyl records continues to grow.
RELATED ARTICLES
album reviewalbum reviewscraft recordings
9.0