SPILL ALBUM REVIEW: THE WILDERNESS OF MANITOBA – FAREWELL TO CATHEDRAL 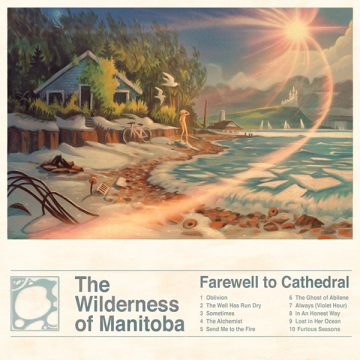 The Wilderness Of Manitoba
Farewell To Cathedral
Popguru Sound & Vision

Recorded in just two days at Revolution Recording in Toronto, Juno award-winning band The Wilderness of Manitoba has returned with its sixth album, Farewell To Cathedral. Characterized by a solemn, yet expansive folk-rock sound and Will Whitwham’s tender, earnest lyrics, this is a solid collection of tragically optimistic songs about moving on, moving outward, and finding one’s way forward.

Opening track “Oblivion” starts at a full canter, the distinctive falsetto of Whitwham’s voice like reins, controlling to what heights the song will soar. “The Well Has Run Dry” follows, but slows the pace, foreshadowing a pattern that will persist throughout the album of galloping ahead in one song before sinking down again in the next. It starts with some sensual guitaring to start before building slowly into something akin to an Irish folk ballad about the end of a relationship, the backup vocals of Victoria Carr harmonizing poignantly.

“Sometimes” is one of the stronger tracks, another beautiful song with gentle washes of crystalline guitar, Carr’s’ backing vocals adding a sublime folk charm to each song she appears in. Early single “The Alchemist” is more urgent than the first three tracks, the drums pounding along steadily, ceremonial almost, Whitwham’s falsetto surrounded by more varied streaks and flares of instrumentation that coalesce and push the limits of what the song can hold.

“Send Me To The Fire” reverses course again, a quiet, spare song, spectral and melancholic, with nice little twirls of guitar around the edges before the surprise of “The Ghost of Abilene,” which starts at a full trot and tells the familiar tale of a man lost in the desert, looking for his lover. More narrative than the other tracks here, it’s a classic folk-country scenario, and arrives here with all the sultry twang and bend and searing guitar that characterizes “desert western” songs, but Whitwham’s vocals color the atmosphere in a unique, chillier hue.

In the end, it’s clear the band has some nice range within itself, sliding up and down rhythmically, skipping easily from one kind of folk rock to another, from earthy pastoral country to more spectral tones, and they prove capable of keeping things interesting for an entire album.

SPILL ALBUM REVIEW: THE WILDERNESS OF MANITOBA – FAREWELL TO CATHEDRAL

Dan Kennard is an English teacher and fiction writer living outside Kansas City, Kansas where he lives with his wife and children. More about his work can be found at amazon.com/author/dankennard. You can also follow him on Twitter and Instagram @kennardistry or contact him at [email protected]
RELATED ARTICLES
album reviewalbum reviewsthe alchemist
8.0