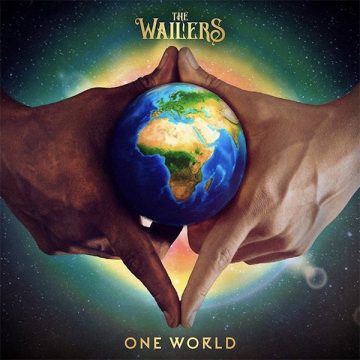 The Wailers
One World
Sony Music

The Wailers–indivisible from Bob Marley of course, but the band has always been about creative musicians, needing not only to make a living but also as an outlet for their own music-making. Of course, as long as the name exists, they are going to have to play Marley’s songs, and that’s all to the good. But a release like this, the band’s first studio release in over a quarter of a century, can also give them the opportunity to introduce some fine, new, original music in its own right.

Make no mistake, this band has evolved. There have been numerous lineup changes over the years, even if at times on Destiny, you could be forgiven for thinking Marley himself was there. The bloodline is of course–Marley’s daughter Cedella and her son Skip make their presence felt immediately on the opening “One World, One Prayer”, also a single from the album), and Julian Marley sounds very much like his father on “When Love Is Right”. The band still includes members who backed Marley, and the younger generation is represented here too by drummer Aston Barrett Jr. and vocalist Josh David Barrett.

Bob Marley’s international appeal is underlined by the presence of several performers from the world of Latin music; the set’s producer is Emilio Estefan, and also contributing are Puerto Rican star Farruko and the rootsy-sounding Natiruts. Shaggy turns up too, adding a little dancehall flavour to this set of mostly catchy one-drops,  a nice blend of classic and contemporary reggae with “What A Shame”, even some ska influence with “Walk And Talk (Never Go Astray)”. The bouncy “Only In Jamaica” could well become another tourist board theme for the island!.

Throughout, the arrangements repay careful listening. There is often more going on than is apparent on first listen. As you might expect, the band has not stood still but the roots are still deep and obvious.

The Spill Magazine is a Toronto-based online publication dedicated to covering the independent music scene with a strong focus on our thriving hometown talent. Our writers bring you up-to-date news, in-depth features on musicians and reviews for the latest CD releases. We also travel to the front lines for all local festivals including Canadian Music Week and North by Northeast. Don’t forget to check out our Facebook and Twitter pages for all daily Spill updates.
RELATED ARTICLES
album reviewalbum reviewsbob marley
8.0