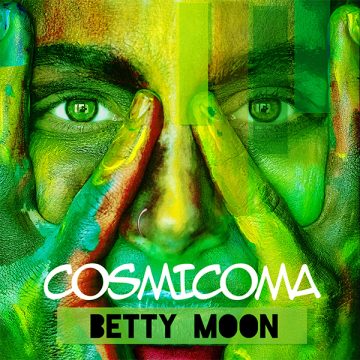 Cosmicoma is Betty Moon’s 10th album, and her first since last year’s Little Miss Hollywood. To me, Cosmicoma is very much a continuation of Little Miss Hollywood, not exactly a part two, but a continuation. Over the years Moon’s music has become much darker and her lyrics match.  And, to my ears, Moon has come up with an album that is every bit as good as her last. In fact, she just keeps getting better.

The album opens with “Black Bloods”,  a slow groove which sets the stage for the album. Guitar-driven and on the dark side. But she swiftly moves to “My Only One”, a gritty, heavy, guitar-heavy rockin’ song. It is like a dark grunge song, featuring Moon’s sharp and pointed lyrics. An angry song about infidelity (“You say you want me to yourself/Even though you’ve got somebody else”). Moon is going to keep the listener guessing. The first time I listened to the album, I had no idea as to the direction she was taking me. This is a huge compliment. She moves from style to style with ease. Listen to the latin-influenced “The Mexican”, or the ballad “Where My Heart Is”. The diverse sounds found on this album is quite refreshing when a number of artists seem to be content to find a style and remain in that arena. Moon, however, takes everything and  makes it all fit together.

Moon produced the album, with help from longtime collaborators Justin Smolian and Owen Barry who helped her achieve her musical goals. What is most striking on this album is her use of guitar. For much of the album it is front and centre and she seems to build the songs around this sound. Some of the songs are quite stripped-back and sparse, such as “Where My Heart Is” or even the last track “Screamatorium”, which, while somewhat stripped, has a driving rock sound and is the perfect way to bring the album to an end. The song also features some very fine screaming from Ms. Moon.

Cosmicoma is a very strong album. For Moon, it is a continuation of her growth and willingness to explore various styles and genres and incorporate this into her music. She has always been adventurous and it has paid off for her. On this album she reaches for her guitar and focuses on the use of her voice. The end result is a captivating, exciting, and truly fascinating album.

Born and raised in Whitby, Aaron discovered music through his love of The Beatles. This led to a career in radio, writing for various publications, and ultimately a radio show about The Beatles (Beatles Universe), which ran for over four years. When not immersed in music, Aaron enjoys spending time with the loves of his life -- his wife Andrea, and daughters Emily and Linda (all of whom have an intense love of music too).
RELATED ARTICLES
album reviewalbum reviewsbetty moon
8.0