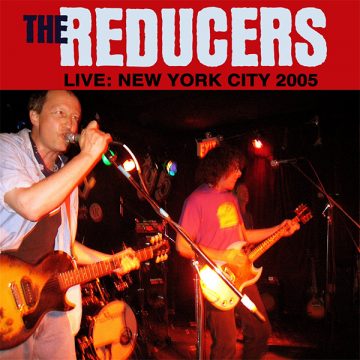 Hailing from New London, Connecticut, The Reducers produced some mighty fine music from 1978 until 2012. The band consisted of Hugh Birdsall (vocals, guitar), Peter Detmold (vocals, guitar), Steve Kaika (vocals, bass) and Tom Trombley (drums). Influenced by the original punk scene, this group produced many studio albums during their career and some fine live recordings featuring their brand of punk. This particular album, Live: New York City 2005, is actually a soundboard recording of one of their many shows in that city. In this case, the group is caught live at Arlene’s Grocery, a great club in New York City. The club is still there, but, sadly, The Reducers are not an active band in 2021.

Here the band shows what they can do in a short power packed set. Sixteen songs in 47 minutes. The energy is incredible and the music is exciting, even 16 years later, and the music does not age. It is not punk, but there is a punk sensibility to the music. Give “Bums I Used To Know” a spin, and the song bursts out of the speakers, and for just under three minutes, the listener is in that club rocking to the band. It has the punk rock vibe going for it, but The Reducers add their own style and sense.

And, they were one hell of a band. Tight, and working as one. Much like the Ramones, The Reducers had one foot firmly in punk and the other in classic AM rock/pop. Their wonderful cover of “Get Off My Cloud” is a prime example. And as far as covers go, their version of Chris Spedding’s “Hurt By Love” is the perfect encore/final song. And this love of AM rock comes through in their own songs as well, such as “I Call That Living”, a song that should be a rock classic. “On The Road Again” falls into the same category. This could be a great lost Kinks song from Low Budget.

Live: New York City 2005 sounds great as a live album. Given it is a basic soundboard recording, very little has been mixed in or out. It sounds like the real deal. All too often live recordings are so carefully recorded and mixed that the live energy often gets lost. Not with this album. In fact you can almost hear the beer bottles hitting the floor. But the truth is, you won’t hear the beer bottles, the audience is caught under their spell of short, sharp, shocked songs. There is a lot of power in two minutes, 45 seconds.

Live: New York City 2005 is a great artifact to have for The Reducers. It is a great live recording of a band, perhaps, at their peak. In 2005 they had already released some brilliant albums and they still had a way to go until they called it a day in 2012, when bassist Kaika passed away. This album gives us a chance to step back 16 years and enjoy The Reducers.