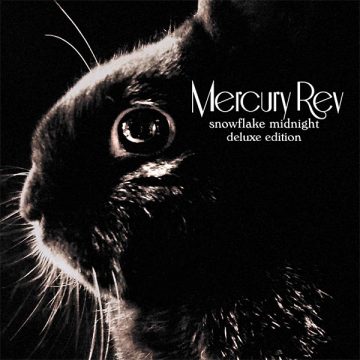 Let’s put things straight where Mercury Rev is concerned: they are a prog rock band. However, instead of being part of the much-maligned branch of prog rock that deservedly got flak for its pretentiousness and often senseless soloing and tempo/melody shifts, they always stuck to that forward-thinking part of prog rock where making sensible, innovative music was at the forefront.

But to be able to play such music, you have to be both talented and know what you’re doing. And Mercury Rev were. Deserter’s Song, their now classic album from 1998, is enough proof, although they actually never made a poor album.  Not much of them has been heard recently, and this deluxe reissue of Snowflake Midnight from 2008. It was an album of theirs that somehow undeservedly fell under the radar, even though some titles from it got solid airplay.

This deluxe edition is here to rectify this too, and deluxe this reissue really is. Along with the original album, it actually has four additional ones to complement it. The second disc/album consists of previously unissued outtakes, a third one of completely unreleased tracks, fourth is a set of live tracks, also unreleased, and fifth is the first commercial issue of an album titled Strange Attractor, itself complemented with four remixes.

This certainly isn’t going to be too much for Rev fans, but actually it shouldn’t be even for casual listeners who are in for some good, thoughtful music, as there is no weak spot, on the five discs/albums here.

Formerly a lot of things, including a journalist and a translator, currently a freelance writer living in The Netherlands.
RELATED ARTICLES
album reviewalbum reviewscherry red records
10