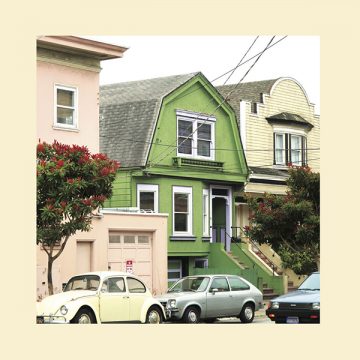 For the third year in a row, The Reds, Pinks, and Purples have released another album of gentle, hazy, DIY pop music that is mostly self-recorded and self-produced by Glenn Donaldson. Following on the heels of 2020’s You Might Be Happy Someday is the latest release Uncommon Weather. Working out of San Francisco’s Inner Richmond district, the music on this latest album can be viewed as an extension of the pastel colors that define that particular area and work well as a visual representation of the music itself: colorful on the surface, but tinged with melancholy beneath the surface.

These are mostly short, melodic songs with hardly any of the thirteen tracks running over three minutes in length. In that sense Donaldson has embraced the elegance of simplicity here to deliver a series of somber, meditative reflections on the past. Despite the generally upbeat nature of the melodies, the lyrics end up undermining the sounds and create an interesting contrast, each track laced with some level of regret, disappointment, and loss. Titles like “I Hope I Never Fall In Love” and “A Kick in the Face That’s Life” and “The Record Player and the Damage Done” among many others tell you all you need to know about the tone of the album.

“Don’t Ever Pray in the Church on My Street” opens with some edgy guitar before settling into a clopping beat, with lyrics expressing the notions of fear and hopelessness that run through much of the album. In “The Biggest Fan” it turns more to disappointment with others. The lyrics throughout are crafty, and I can appreciate the twist on the title and the subtle changes to the lines that indicate whoever this is addressed to has in some sense finally come clean. “Sing Red Roses for Me” is the longest track, given with the most room to breathe and drift, and stands out from the others as more sentimentally beautiful despite maintaining the general tone of the rest of the album.

The Reds, Pinks, and Purples are the rainy-day version of a sunnier band like Real Estate in the way they sound, but there is little variation in the overall atmosphere from track-to-track to break up the mood or change the pace. In the end, some of these tracks might be a little too concise and accumulate into too much of a downer for some people to embrace fully.

Dan Kennard is an English teacher and fiction writer living outside Kansas City, Kansas where he lives with his wife and children. More about his work can be found at amazon.com/author/dankennard. You can also follow him on Twitter and Instagram @kennardistry or contact him at kennardistry@gmail.com.
RELATED ARTICLES
album reviewalbum reviewsslumberland records
8.0